Valmet participates in Earth Hour for the ninth time

The global Earth Hour is taking place on Saturday March 24, at 8:30-9:30 P.M. This is the 12th time this global event is held, and ninth time that Valmet is participating.

This year, a record number Valmet locations will participate and turn off their lights on Saturday. All Valmet's locations in China, Asia-Pacific, North America and South America are participating this year, as well as all locations in Finland, Sweden and most of the EMEA area.

Earth Hour is a global climate event organized by the World Wildlife Foundation, WWF, that was first held in Australia in 2007. The purpose of the event is to switch off all lights for an hour as a sign for the climate and the wellbeing of the globe. The symbolic gesture is a way to express one’s concern about the environment and climate to decision-makers. In 2017, 187 countries participated in Earth Hour and about 12,000 landmark buildings around the globe switched off their lights.

Valmet's locations in China are active in participating in Earth Hour.

Valmet is committed to mitigating climate change throughout our value chain. We aim to develop sustainable products and are committed to the sustainable use of resources and the prevention of pollution. We always operate within our local environmental regulations and permits. Since 2009, Valmet has followed an operational efficiency program in our production locations, with steady progress towards the 2020 reduction targets for energy, water and CO2.

During 2017, we renewed our environmental efficiency program for own operations by setting targets for 2030, as well as by adding new objectives to increase the scope of ISO 14001 system certification, to reduce the amount of waste sent to landfill, and to increase our use of renewable energy. We also introduced environmental guidelines for our offices. 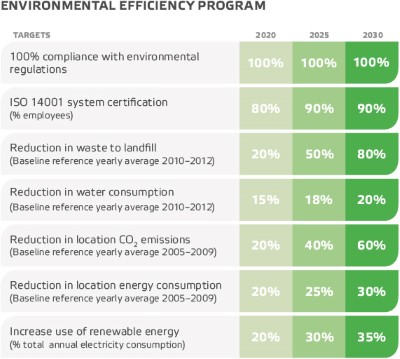 All of Valmet’s locations are committed to improving environmental efficiency. Here are some highlights of energy saving and environmentally friendly actions our locations did in 2017.

One of the largest fractions of Valmet’s waste is sand from our five foundries, which is traditionally landfilled. We took another step towards the circular economy, when 60 tonnes of sand from the Jyväskylä foundry in Finland was instead reused as material in a golf course construction. In 2017, Jyväskylä facilities started to source their district heating from renewable fuels

Savings from LED conversion in Beloit

Beloit location in Wisconsin, USA achieved significant savings in electricity usage largely due to its led conversion project. Beloit was able to decrease its electricity usage by around 235,000 KWh amounting to around 23,500 USD in monetary savings.

Lentokentänkatu location in Tampere made several investments to improve environmental efficiency in 2017. The investments included installation on over 370 LED lamps, replacing of HVAC automation with a modern one, changing of district heating heat exchanger and adjusting flow of toilet water taps.

Valmet’s location in Clarks Summit, Pennsylvania is considering re-lamping the entire factory. The aim is to replace approx. 1,300 T-8 fluorescent tubes with LED’s.

You can read more about Valmet's achievements and environmental performance in 2017 in our Annual Report.