In December 2018, the much-talked-about new NA4 Naantali power plant of Turun Seudun Energiantuotanto Oy (TSE) will celebrate one year of being online. In just less than a year of operations, the plat has shown good operational results and has sparked a lot of public interest. 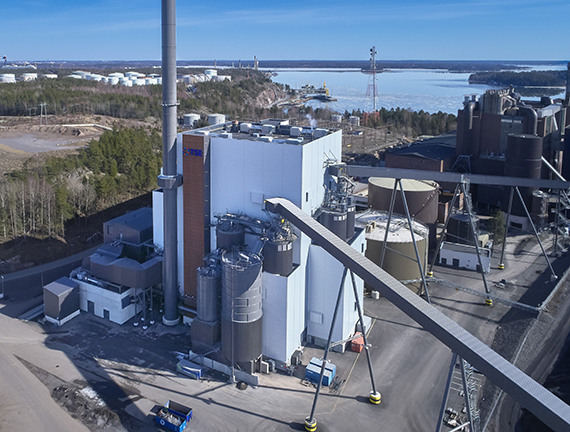 Valmet has a great reason to celebrate this anniversary too. In large part due to the global scope of Valmet’s delivered solutions, this multi-fuel power plant is a showplace packed with its innovative concepts, and a real breakthrough for the future. Naantali Blocks NA 1–3 have been running with the Valmet DNA solution for decades, and the newest Block NA 4 is a great continuation for long-term cooperation.

In addition to the delivered technology – a circulating fluidized bed boiler, with the flexibility to burn different types of biofuel – Valmet’s automation systems and Industrial Internet solutions enable the plant to run at a totally new level of efficiency in its performance and operations.

Now that the modern block NA4 has the latest version of the Valmet DNA automation system, the entire Naantali power plant is running with Valmet DNA and operating from one centralized control room. From overall process control and district heating management, to monitoring emissions and on to managing bio fuels from the forest to gate – everything relies on automation and Industrial Internet solutions developed by Valmet. Together, these systems compose one seamlessly functional entity – for basic control, optimization and advanced reporting. 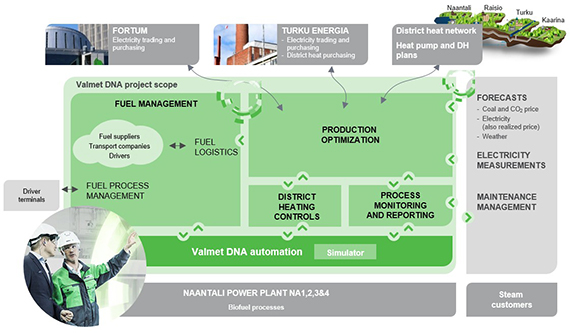 TSE’s investment in advanced automation and Industrial Internet-based systems is a smart solution, bringing more benefits to the optimization of the entire Turku Region energy system.

Within this wide set of automation solutions, the biggest novelty is Valmet DNA Fuel Chain Management, which was developed together with the customer.

The unique advantage of Valmet DNA Fuel Chain Management is that the system enables fuel deliveries to be automatically planned according to the plant’s production forecast. DNA Fuel Chain Management is integrated with Valmet’s energy production optimization solution, making the plant’s daily operations more effective, transparent and profitable for all parties involved in the supply chain.

The Industrial Internet-based solution enables weekly fuel orders and logistic information to be available for plant personnel, logistic companies and truck drivers online. The arriving fuel is recognized at the plant gate and each truck load is recorded. The amount of energy is calculated with Valmet DNA Fuel Data Manager system and moisture is measured with online measurements. Contract management is updated according to calculations and information is available for the supplier and plant personnel. Transparency is key in collaborations and communications.

“Valmet DNA Fuel Chain Management has allowed us to integrate every factor in the production of biopower into a single, controllable unit. Previously, we had to conduct fuel ordering via email, which was a daunting challenge. With the new optimization tool, it has been made effortless,” says Sanna Alitalo, Operations Manager, TSE. “Now, I can’t manage without it.” 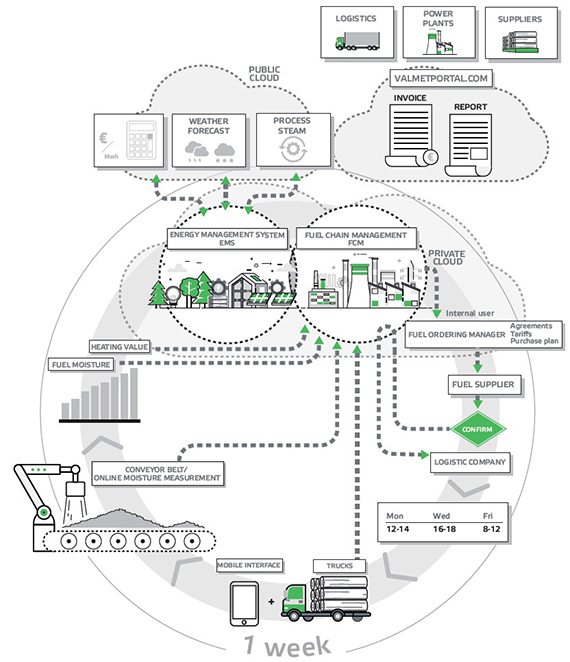 Among the new capabilities is the optimization of the district heating transmission from Naantali to the district heating network of the Turku region. Valmet DNA District Heating Manager is utilized, for example, to control the temperature and pumping of the heat carrier in the 15-km-long pipeline between the Naantali plant and the city of Turku. Proactive control of supply temperatures helps maximize the CHP power production and reduce heat loss along the entire line.

“With Valmet DNA District Heating Manager, the heat transfer capacity from the Naantali plant to the city of Turku is continuously adjusted based on consumption demands. As a result, fuel costs are cut considerably, even in fluctuating and demanding temperature conditions. We have achieved significant savings with the optimized control of the 15-km district heating pipeline between Naantali and Turku,” adds Tapani Bastman, Managing Director, TSE.

Now that almost a year has passed, the benefits of this automation investment strategy are easy to spot.

From input fuel to output heat and electricity, all steps and processes of the new TSE’s NA4 plant are controlled and optimized with ease. And while market volatility requests changes, flexible and future-proof systems allow TSE to look to the future with confidence.

“Our major investment in advanced automation and Industrial Internet-based systems is a smart solution, bringing more benefits to the optimization of the entire energy system of the Turku Region. In the future, there are performance agreement and solution roadmaps in place to further develop Valmet’s smart energy solutions in Naantali,” says Bastman.

Valmet DNA Fuel Chain Management has allowed us to integrate every factor in the production of biopower into a single, controllable unit. We used to conduct fuel ordering via email, which was daunting. Now, it is effortless. Now, I can’t manage without it”
Sanna Alitalo, Operations Manager, TSE
With Valmet DNA District Heating Manager, the heat transfer capacity from the Naantali plant to the city of Turku is continuously adjusted based on consumption demands. As a result, fuel costs are cut considerably, even in fluctuating and demanding temperature conditions. We have achieved significant savings with the optimized control of the 15-km district heating pipeline between Naantali and Turku.”
Tapani Bastman, Managing Director, TSE
﻿

Optimized means profitable at all times

Two of Finland’s biggest energy producers, Helen and Vantaa Energy, have improved their short- and long-term production planning with a Valmet DNA Energy Management solution utilizing the vast opportunities of the Industrial Internet.

The new multifuel boiler plant at Turun Seudun Energiantuotanto (TSE) is an excellent example of the best features of CFB technology, such as the possibility to use whatever fuel is currently available at the lowest cost.

Today’s energy producers are facing many challenges: aging production facilities, cost pressures, challenging fuels, new emission regulations, and the rise of renewable energy sources. A recharge with Valmet can be an answer to these challenges.

Instead of typical production planning and control, data-driven applications incorporating artificial intelligence (AI) help us take a more holistic view of the entire chain of production by utilizing data from several sources. While Industrial Internet applications can be used to instantly optimize processes, they also allow us to predict what’s around the corner.

Performance Centers are a gateway to Industrial Internet services

Valmet Performance Centers are an easy-access channel for customers to Industrial Internet applications and remote services.

High-quality data will be a key source of business value in the future. While machines and equipment are one part of a wider production system that creates value, software will have an increasing role in transforming data into digital services and solutions.