The SoftReel B is an innovative winding system that provides producers and converters of premium tissue and towel grades a competitive edge.

A state of the art in winding

The B makes the difference

The B in Advantage SoftReel B stands for Belt and it is the belt in this tissue winding technology that gives producers and converters the control over the winding process that allows producing large diameter parent rolls while keeping exceptionally uniform caliper throughout a whole roll. 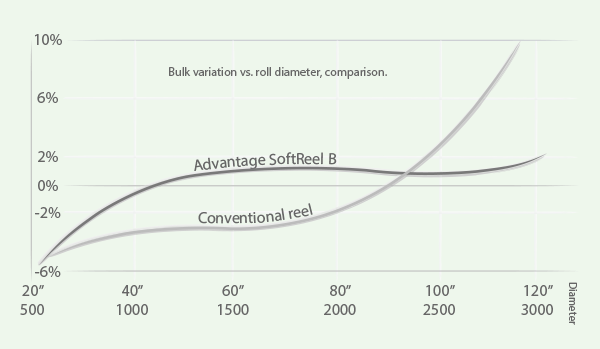 SoftReel B is equipped with linear primary arms and secondary carriages with CWA, a short belt run with a stretcher and guide mechanism.

Replacing an old winding principle…
Using conventional technology for winding low-density paper such as premium tissue and towel grades does not produce the same good results as when winding high-density paper.

When low-density paper is fed into a nip consisting of a reel drum and the parent roll, the length of contact, “A” of the parent roll being wound becomes longer as the diameter of the roll increases, making the wound-in tension in the roll continuously lower. Consequently, these parent rolls are not of uniform caliper throughout, which limits the diameter and the speed at which they can be wound, but also unwound in converting lines. 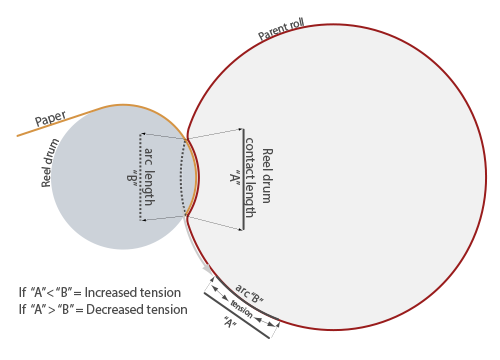 Replacing the reel drum with a belt changes the physical nature of the nip. Instead of a round, hard-surfaced reel drum and parent roll, SoftReel B technology enables the tissue and towel grades to meet a flat, soft-surfaced belt in the nip. In other words, the length of contact “A” is always shorter than the arc “B” even as the diameter of the roll increases. When the tissue exits the nip the sheet is elongated and thus tension is generated inside the roll. The result is consistent control of the wound-in tension. This is why SoftReel B is able to produce uniform large parent rolls. 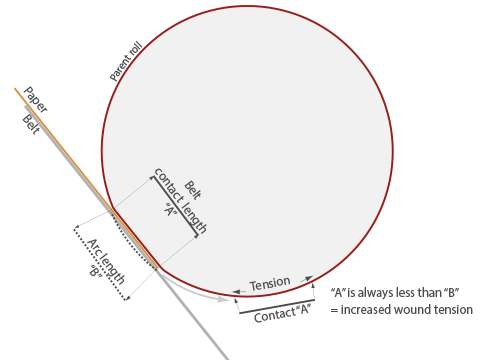 New or rebuild
SoftReel B is an alternative to the problems of conventional winding that tissue makers have traditionally accepted as part of the process. Also SoftReel B is a mature technology available as an option for all new and existing Valmet tissue machines as well as for installation on tissue lines from other suppliers as an upgrade or rebuild.