The world’s northernmost biogas plant has been running for five years at the Vocational College Lappia in Loue, in Finland’s Tervola municipality. The biogas plant process is controlled with the Valmet DNA automation system.

Vocational College Lappia serves Western Finland, while Lappia Education Company operates throughout all of Finland. The Rural Entrepreneurship program provided at the Loue campus is just one area of study. This is where the vocational school executes its strategy of focusing on the bio and circular economy, as well as nature, adventure and entrepreneurship.

Jarmo Saariniemi, Office Manager of Centre of Expertise for Rural Entrepreneurship, has worked as a project manager for the biopower project. “Design began already in 2009, and the plant was built in 2010. Valmet’s automation system was purchased at the end of 2013, and the biological process began the same year. Heat generation started in 2014. Along with producing energy, we also test the efficiency of biogas production in arctic conditions,” Jarmo says.

The main raw material is cow slurry, which is mixed with grass silage. With 115 cows, you get about 7–7.5 cubic meters of sludge per day. The manure is collected through floor grills into a pit. From there, it is transferred into a 16-cubic-meter tank, where it can be mixed with grass. It then continues on from the tank as raw material for the biogas plant.

The biogas obtained from the plant is used to heat the facilities at the vocational school. In the future, it will also be used to heat a new greenhouse as well as for the possible production of transportation biogas. In the summer, the amount of sludge reduces, but also the need for heating. And even if heat production decreases during the summer, the biological process is still working.

Excellent fertilizer for the fields

When the manure comes from the barn, the solids content is about 10–12%. After it has gone through the process, this content is only about 5–6%. Reject manure can easily be spread on the organic crops, because it can be distributed evenly over the fields in a liquid form. With its use, weed seeds have decreased and the overall condition of the fields has improved. 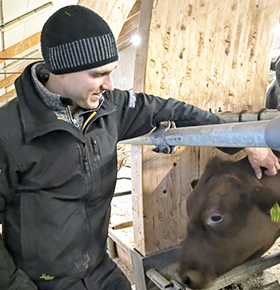 The cows at the vocational school are well looked after. They enjoy the barn’s LED lights and calm music. They’re cared for by the students, farm workers and agrologist Arttu Lehtilahti, who earlier studied at the Loue vocational college and then continued his studies at Seinäjoki University of Applied Sciences. Both the barn and the biogas plant serve as an ideal educational environment for the students.

The nitrogen of the manure is used in the bioprocesses. In the biopower plant, the slurry is digested by microbes at 37 °C, which is the optimal value for the mesophilic process. The biogas consists primarily of methane (approx. 55–65%) and carbon dioxide (approx. 35–45%).

Heart of the biogas plant pumps with automation

During the planning stage of the process, each step was defined precisely to enable a smoothly operating automation system for the plant. Valmet’s expert for the project was Markku Keskimaula. Additionally, a designer participated from the Seinäjoki University of Applied Sciences.

“Commissioning proceeded well because the design work had been carefully done. Markku’s input for this was very important,” Jarmo points out. Valmet trained the automation system users at its regional office in Kemi, Finland, as well as on site at the vocational school. 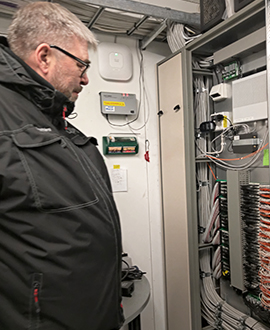 The Valmet DNA display shows the status of the entire biogas process at a glance. The operator can anticipate disturbances, and the entire plant has never experienced downtime due to a failure. The bioprocess conditions have stabilized.

Jarmo emphasizes the importance of automation in the biogas plant. He comments: “Automation is the heart of the biogas plant. For the functionality and safety of the plant, it is essential. Likewise, the automation makes it easier to operate the process and frees up the personnel for other tasks. Valmet DNA has been a good choice for us. The specification, installation and process management have worked exceptionally well.”

Remote connection from the classroom to the process

In the classroom, Jarmo presents Valmet DNA automation to his students. The remote connection to the system can be established quickly. Jarmo illustrates how to get more information from the various actuators. He presents the interlockings, functional descriptions and loops. He explains how to handle disturbances and how to repair an actuator. 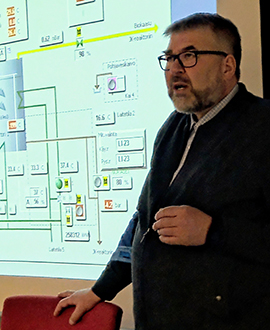 Jarmo is convinced: “Valmet DNA is a clever learning environment. It is user-friendly. With its help, it is possible to illustrate the process operations to students, for example, how to start the pumps, how to change valve positions, and so forth. For teaching purposes, it is also possible to create different scenarios that need to be solved.”

Jarmo underlines that using Valmet DNA in teaching is also beneficial for the students in other ways. With the help of automation, the students can also get trained on maintenance. A similar training environment may not be possible later on when they are working at plants.

One the plans for the school is to get a tractor that runs on biogas. This is a topic that has raised interest in the class and aroused discussion. It is clear from the points raised that ecological thinking is deeply ingrained in the school. 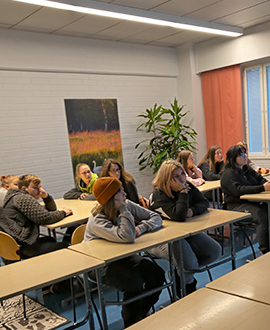 Circular economy is the future

"Fat-based slaughterhouse waste would actually be the best material for gas production. That’s why we have invested in a hygiene unit. When we can start using it, we can start to run fat in the biogas plant. In the same school ecosystem, we have an entrepreneur-led meat processing plant. So, raw material is close at hand,” Jarmo explains.

Jarmo is the initiator behind the biogas project. He has been interested in the subject since visiting trade exhibitions in the field in other countries, such as Germany, and has built relationships with their bio experts. Recently, a group of Belgians visited Jarmo’s school for tips to take back to their own school.

Working for the bio-economy is a significant initiative for the Loue school’s drive toward a circular economy. Jarmo believes we will see an increase in future jobs in this area. Valmet, too, is stepping up its role as a strong automation expert when it comes to alternative fuels – biogas, renewable fuels and LNG. Both Lappia and Valmet have understood the necessity of the bio-economy.

Contact us
Automation is the heart of the biogas plant. For the functionality and safety of the plant, it is essential. Likewise, the automation makes it easier to operate the process and frees up the personnel for other tasks. Valmet DNA has been a good choice for us. The specification, installation and process management have worked exceptionally well.”
Jarmo Saariniemi, Office Manager, Centre of Expertise for Rural Entrepreneurship

The main raw material is cow slurry, which is mixed with grass silage 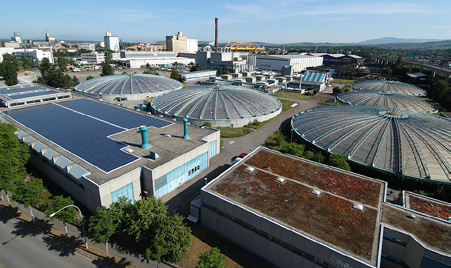 The Valmet TS device makes the reliable and accurate measurement of solids content in sewage sludge of different origin possible - and this at minimal maintenance efforts.

Finding the sweet spot for the polymer dose