The Hamburger Hungaria mill, located in Dunaújváros, Hungary, 70 km south of Budapest, has always aimed to achieve better results and has been able to improve the productivity and efficiency of its PM 7 year after year. First started up in 2009, the machine produces 100% recycled brown liner and corrugated medium. It has an annual capacity of approximately 470,000 tonnes, a width of 7.8 m and an original maximum production speed of 1,400 m/min. 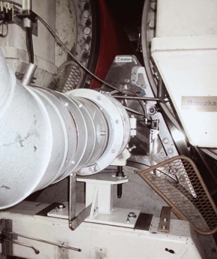 In 2013, pre-dryer section runnability became a bottleneck for PM 7. The mill looked at improving runnability in the first dryer group, which would also reduce draw from the press to the dryer. This would be the next step in improving production line efficiency.

An additional aim was to save on costs in the spare part sealings of the blow boxes. The existing concept had a feature that wore out the sealing material rather quickly, resulting in high annual operating costs.

The mill set strict requirements for the delivery. They included a stable web run at 1,400 m/min (with the possibility of a future speed increase up to 1,500 m/min), lower press-to-dryer draw, higher time efficiency and a longer lifetime for the blow box sealings.

The Valmet Hirun Web Stabilizer system was successfully started up at the beginning of January 2014. The test run met all the requirements for a stable web run, fewer breaks in the first group and lower draw. The guarantee for the sealing lifetime was also fulfilled.

"It was an easy decision for us to select HiRun, since it is known as the industry standard technology in terms of dryer runnability," says György Szilas, Production Manager at Hamburger Hungaria. "I am very pleased with Valmet’s competent approach and attitude; Valmet people helped and worked with us to improve machine line competitiveness and productivity."

According to Attila Bencs, Mill Manager at Hamburger Hungaria, "Any action that reduces costs and improves efficiency is important. The [Valmet Hirun Web Stabilizer] blow boxes were one step forward in our development process. Valmet made this a pleasant and smooth project."