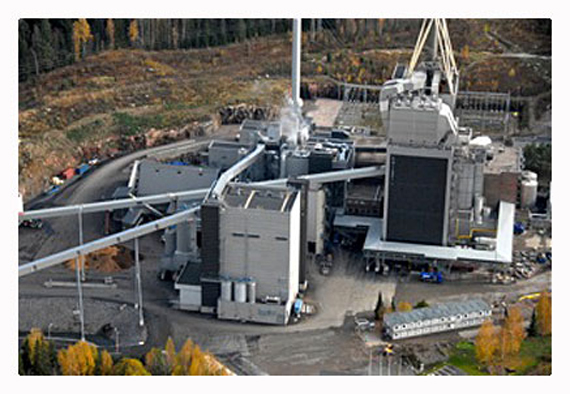 100 kilometers north of Helsinki, Finland, in the city of Lahti, is the world’s first eco-gas fueled power plant. Lahti Energy’s new Kymijärvi II power plant runs on SRF that is gasified, cooled and cleaned before combustion. The plant produces 50 MW of electricity and 90 MW of district heat for the city of Lahti. It was officially inaugurated in May of 2012.

The fuel at the new plant consists of various types of industrial, commercial and building site waste, and some treated household waste is also used. This waste is first converted into product gas, that is then combusted in the ordinary gas boiler. When gas is cleaned before combustion it is possible to produce high pressure and temperature steam for the turbine without risk of boiler corrosion. In the Lahti case the electrical efficiency is over 30 per cent, which is possible as the steam parameters of the boiler are extraordinary for a waste boiler (540 C° and 120 bar).

By doing this, 170,000 metric tons of coal is replaced that would otherwise be used to generate electricity and heat in the adjoining traditional coal-fired power plant. In recognition of this impressive advance, the Kymijärvi II plant was awarded Finland’s Climate Act of the Year Award in 2012.

Valmet excellence – from end to end

Valmet*) delivered the gasification process, plus gas cooling and cleaning, steam boiler and flue gas cleaning system. And the production of electricity and heat is kept consistent thanks to Valmet DNA automation system that covers the entire plant, starting from fuel reception.