During a bicycle race, the rider can clearly feel the rolling resistance of the bike's wheels. Likewise, the rider's power output directly affects their finishing time. The same phenomenon can be witnessed when press rolls rotate against each other in a board machine. As the rolls rotate, a particular amount of power is needed to overcome the forces resisting the roll rotation.

Since press section drives typically take 30–40% of a board machine's total drive power, improving the energy efficiency of the press section drive is an important factor in production cost management. The hysteresis of the roll cover material is a key factor. With low-hysteresis materials, the cover material requires less power to rotate rolls under the nip load, as less power is transformed into heat. Meanwhile, high-hysteresis materials heat up when mechanical energy transforms into heat energy, meaning that the drives use more energy.

One of Valmet's recent successful roll cover R&D projects came up with Press Roll Cover PP* – a new polyurethane cover for highly loaded press rolls. Special attention was paid in developing the material to the hysteresis and heat generation properties of this unique cover. The material structure was tuned at the molecular scale to have exceptionally low internal friction, resulting in a low rolling resistance and low internal heat build.

When comparing cover purchase price and regrinding needs, the rolling resistance of a roll cover and its influence on drive energy play a significant role, especially in the highly loaded press rolls used in board machines. Press Roll Cover PP has higher recovering costs, but the reductions in drive energy typically mean that this expense is recovered already after 1–1.5 years of operation. 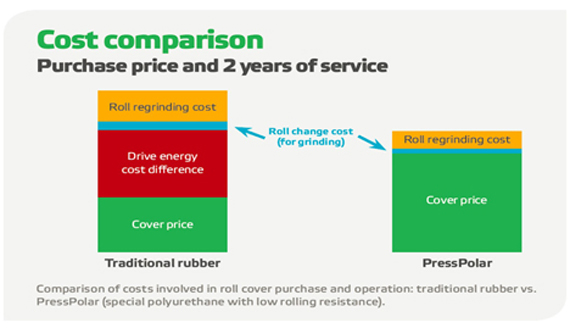 During the first half of 2013, a pair of press rolls in Gruvön PM 6, which produces containerboard grades, started to require recovering as the old rubber covers were wearing out. Valmet's team proposed recovering the rolls with Press Roll Cover PP polyurethane covers to meet the mill's primary requirement for uncompromised durability. This also eliminated the need for roll cooling water circulation, decreasing maintenance, water and pumping costs. Last, but certainly not least, the lower rolling resistance of Press Roll Cover PP would save drive energy. Since Valmet was able to guarantee drive energy savings, Gruvön decided to place an order.

One positive aspect during the project was that the PM 6 staff were encouraged to follow energy consumption in detail. This kept them informed about the recovery project, as well as improving their overall understanding of drive energy consumption. After using Press Roll Cover PP in PM 6 for about six months, press roll drive energy consumption had decreased as promised and the running performance showed the predicted results. The payback time on the investment turned out to be even shorter than promised. It was obvious that investing in advanced roll covers pays for itself in reduced drive energy costs.

The BillerudKorsnäs mill in Gruvön, in the heart of Sweden's paperproducing
region, has clearly detailed targets for shortand long-term sustainability. One
of the targets focuses on energy-efficient production.