In 2013, Jyväskylän Energia completed an extensive automation renewal project at its Rauhalahti power plant in Jyväskylä, Finland. Since its startup in 1986, the power plant had been controlled by a Valmet Damatic automation system. The renewal project now replaced PLCs in the burners, ash handling and water treatment and sootblowing processes to include a plant-wide energy management system, including multipurpose reporting applications as well as fuel management. With good experiences of the Sensodec 6S system at the company’s newer production facility in nearby Keljonlahti, integrated condition monitoring was also included in the new DNA automation system.

Valmet DNA Machine Monitoring makes it possible to implement vibration measurements and analyses as part of the automation system. Operators and maintenance staff are able to monitor the machine condition data based on vibration measurements directly on the control system user interface at their own workstations. Separate data links or manual information combined between different information sources are no longer needed. The investment cost for Jyväskylän Energia was lower as both the control and condition monitoring applications share the same system resources, such as the operator stations and the history database. System maintenance is also simplified and more efficient with all applications configured and maintained in the same engineering environment.

The plant runs on mainly on peat and 50% biofuel in the form of logging and sawmill residue with the additional capability to utilize coal or oil in the fluidized bed combustion boilers. The production capacity of the main boiler is 155 MW of district heat, 40 MW industrial steam and 87 MW of electricity, a dedicated district heat boiler completed in 2004 is rated at 40 MW. This means a lot of rotating machinery in the form of pumps, fans and fuel feeding equipment as well as the main turbine and generator. The DNA integrated condition monitoring system provides continuous monitoring of vibration levels in key machinery.

A Sensodec 6S condition monitoring system at the Keljonlahti facility had been in operation since the plant’s inauguration in 2010. For Toni Hult, power plant revision engineer, with responsibilities at both plants, the introduction of the Sensodec condition monitoring functionality in the DNA automation system came just in time to be included in the Rauhalahti automation renewal. “Having both process and condition monitoring data on the same screen offers numerous advantages. We can even compare vibration levels to the outside temperature if needed, actually the case with one of the blowers,” he says. Earlier Hult had to rely on the vibration information provided by route based monitoring with portable instruments. There had been an earlier prototype online measuring system but it had not been used for several years and did not really work well. As with all solely route based measurement routines the information is infrequent and not continuous, providing only a snapshot of vibration conditions that may not alert the user to rapidly deteriorating problems. “The trending tools provided in the DNA automation system prove particularly useful,” says Hult. “For instance we can have problems with thermal expansion and the ability to follow turbine or pump temperatures and vibration can pinpoint problem operating areas to avoid.” (Figure 1)

Another big advantage for Hult is the ability to follow conditions from his own office or indeed from home if the need arises. “It has happened that I am able to troubleshoot a problem, at the weekend for instance, and sort it out over the phone thus avoiding an out of hour’s trip to work.” Scheduled maintenance is handled during the annual summer outage and vibration data plays an important part in deciding what needs to be done and what spare parts have to be on hand. Work orders can be entered to the maintenance system as and when changes in vibration are seen, with notes as to the severity of the problem and actions needed. Compared to route based measurements, possibly only every month or quarter, the system keeps Hult well informed of machinery condition and repair needs. “We can plan ahead and, if the need arises, back down on the power and repair a blower for instance before any real damage occurs.”

With advanced warning, total bearing failures have been avoided and this has had an effect on the spare parts kept in stock at the plant. According to Hult, new bearing lead times are typically less than a week but where the real saving have been are with shafts and impellers where delivery times are considerably longer. “A bearing failure can damage a shaft or impeller which meant we had to keep them on hand despite sometimes years before needing them. With improved predictive maintenance we no longer have to invest in those spare parts and that is a considerable saving.” (Figure 2) 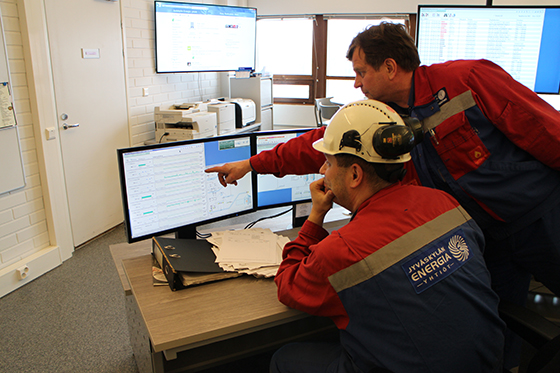 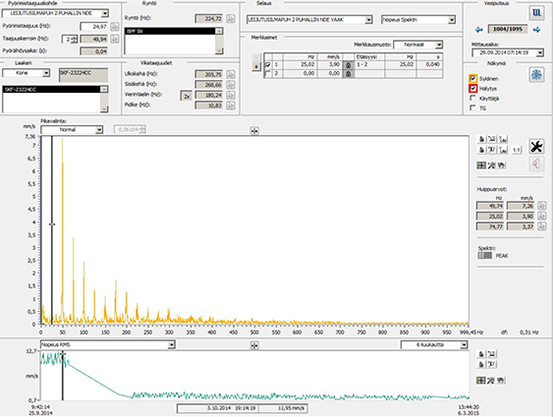 Although district heat is the number one priority for the plant, turbine vibration monitoring is also important. “Bearing frequencies are what we follow mostly, in Keljonlahti for instance, the very long turbine has eight bearings and vibrations at different loads as well as thermal expansion are maybe 50% of the monitoring load,” says Hult (Figure 3). “When starting and ramping up, especially after maintenance, I follow the trends. With the new turbine, the manufacturer had recommended a certain rpm during warm-up which happened to have a very high resonance peak and the system allowed us to change that slightly for smoother operation.” When ramping up or down a tool known as a bode plot allows Hult to examine shaft behavior at each bearing house. This is especially important with turbines where there are only sleeve bearings, unlike pumps that typically use roller bearings.

Although control room operators have not yet had any extensive training, they are alerted to abnormal conditions by the system. Hult has set alarm limits to give a yellow advisory when conditions at a particular bearing deviate from normal to give warning and this can vary from machine to machine. Since installation, the system has proved very reliable. The complete DNA automation system is covered with a service agreement but the only problem experienced with condition monitoring in either plant has been one sensor failure, and with close to 300 installed that is quite a statement of reliability. 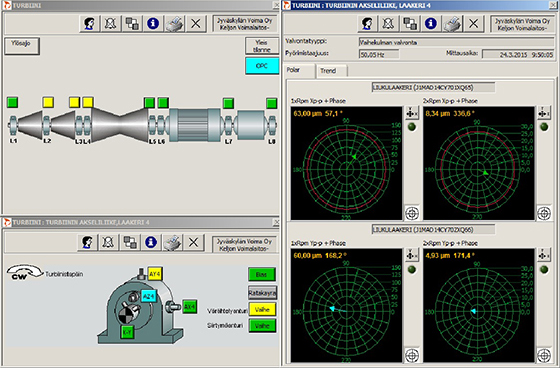 Figure 3. Continuous monitoring of the eight turbine bearings is made easier with color coded alarms. Shown here is a more detailed analysis of bearing number 4.