There are hundreds of Solar gas turbines at power plants around the world. Valmet has developed a total concept for gas, steam and hydro turbine controllers that creates a deeper view into the process and improves turbine reliability and availability. One recent successful retrofit case comes from Lahti Energy Ltd.

Located about 100 kilometers north of Helsinki, Lahti Energy produces and sells electricity to all parts of Finland as well as district heat to its transfer grid area that covers the areas of Lahti and neighboring communities. Today, the company is perhaps best known for its first-of-its-kind solid recovered fuel gasification power plant Kymijärvi II that was started up in 2013 – and features extensively Valmet’s technology.

In late 2012, Valmet (at that time Metso) finalized the rebuild of the Solar gas turbine automation at the company’s unmanned Koneharju district heat plant in Hollola, some 15 kilometers away from the main Kymijärvi power plant area. The latter has for years used the Valmet DNA automation system to control the operations at its Kymijärvi I and II plants. Recently, Valmet also delivered a demanding automation retrofit to the GE Frame 6 gas turbine located on the same site.

“The new solution at the Koneharju plant means better cost efficiency, availability and easier maintenance for us,” says Lahti Energy’s Project Engineer Jarmo Naukkarinen who was in charge of the automation retrofit.

Full integration with the plant-wide system 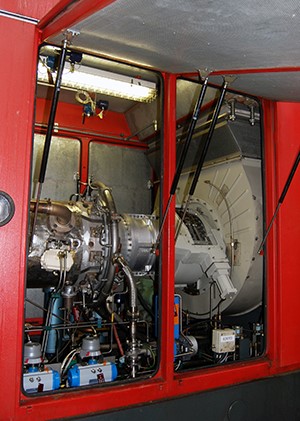 The existing PLC logic controller of the Solar gas turbine was outdated and had reached the end of its life cycle. It
was replaced by a new Valmet DNA Gas Turbine Controller. Valmet’s delivery also included overspeed and machine protection, changes in the hydraulic system, instrumentation including valves and Endress+Hauser field devices, installation supervision, factory acceptance testing and operator training. In testing the control application and in operator training, a gas turbine simulator was used and found efficient.

Full integration into the main control system has made the operators’ life in the Kymijärvi main control room much easier; the new controller is transparent contrary to the old black box. And besides, the operators were already familiar with the Valmet DNA features. This all results in better overall process operability, controllability and availability. At the same, engineering, startups and maintenance work are easier and take less time.

“With today’s DNA technology, it is possible to integrate small systems into larger plant-wide systems. This enables the customers’ maintenance staff and operators to carry out all functions and diagnostics through one system,” says Tom Bäckman, Product Manager, Turbine Controllers, Valmet. “They will see significantly more turbine control and process measurements and signals on the control room displays than before and get more information and faster about possible alarms, enabling easier troubleshooting. This means that they can react quickly to events at any particular plant.”

Now after the rebuild, the Koneharju plant is remote-controlled from the Kymijärvi main control room. The communication between the plants is carried out inside the automation system without a separate remote control system.

”Thanks to the remote access we have been able to minimize visits to the Koneharju plant,” Naukkarinen points out. Also Valmet specialists have remote access to the system for online analysis and support.

Within a radius of 40 kilometers, Lahti Energy has over ten plants that have a remote control connection to the Valmet DNA automation system, and the number will increase in the future. For example, another Solar gas turbine in Nastola, some 20 kilometers from the Kymijärvi main plant is currently being retrofitted with a new Valmet DNA Gas Turbine Controller and integrated into the plant-wide Valmet DNA system. Altogether, Lahti Energy has three Solar gas turbines.

Since its commissioning, the experiences gained with the new turbine controller have been positive. “It functions well,” comments briefly Hannu Rosenlund, Operations Supervisor at Lahti Energy. He is specialized in the Solar turbines and has long experience in all kinds of power plant turbines. It goes without saying that his expertise was invaluable in charting the needs for the new turbine controller.

“However, we have not run the turbine enough to benefit from all its automation features. But I can say that the analysis tool is great. And in general, compared the earlier system, detailed information now provided by the system was earlier available only at the Koneharju plant when standing right by the turbine.”

A control concept that interests

Valmet’s well-working concept for the gas, steam and hydro turbines has not gone unnoticed. According to Tom Bäckman, for example, several power plants in Europe have shown interest in modernizing their Solar gas turbines with Valmet’s technology.

The total concept includes also machine monitoring, information management and the possibility to integrate them into a mill-wide distributed control system. Having the engineering tools in the control system creates a deeper view into the process.

Valmet supports its control systems for at least 25 years and provides them with new software that communicates with the existing system without any need to redesign or re-engineer.

The existing PLC logic controller of  the Solar gas turbine was outdated and had reached the end of its life cycle. It was replaced by a new Valmet DNA Gas Turbine Controller.

Valmet offers you the convenience and simplicity of a stand-alone gas turbine control combined with the thoroughness of a fully integrated system.