The real value in engagement surveys is created after the survey ends and the results are in. It is the time when teams discuss, and actions are taken. At Valmet, we’ve been working to master the after the survey impact through a systematic approach consisting of defining focus areas, creating action plans and following up on those actions – and our efforts are paying off.

Valmet’s trend in employee engagement is a success story. Since 2014, overall engagement has increased by 12 percentage points. The positive trend extends beyond engagement as well, with double digit increases in more than a third of the questions and a 20 percent increase in the survey response rate. 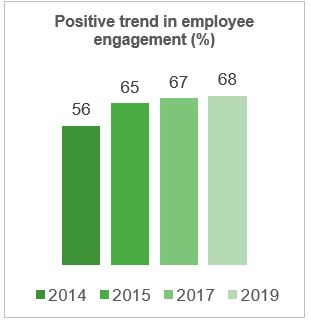 “It has clearly been a good period for Valmet. We conducted our fourth OurVoice engagement survey earlier this year and once again achieved a very high response rate of 88%. The results show that we continue to improve in nearly all areas, with particularly nice improvements in our chosen focus areas, around half of which increased by five percentage points or more since the last survey,” says Hanna Heikkilä, head of Talent Management at Valmet.

Following the survey, each business line, area and Valmet as a whole chooses 2-3 areas on which to focus. Action plans are created and executed in the two years following the survey – progress is followed up quarterly. The OurVoice survey cycle is long on purpose, so that there is enough time to take action based on the results. At the end of the last survey cycle, 95 percent of the actions set by the business lines, areas and Valmet as a whole had been completed.

“We’ve done very systematic work and a good job to improve in our chosen focus areas. But, the real value of an engagement survey is what you do with the results – and how well we’re able to use the feedback to improve. I think we are on a good path, but we need to continue to dive deeper in the organization and ensure that the same systematic approach reaches all teams within Valmet. That is the only way every Valmeteer feels the difference OurVoice can make,” emphasizes Heikkilä.