We have had excellent support from Valmet every step of the way."
Leif Karlsson, Project Manager

Save fibers, chemicals & energy. Increase the competitiveness of the entire value chain from pulp, board, paper, tissue, and nonwoven making to final converted end products. 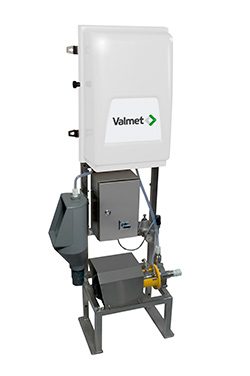 Stora Enso Skoghall is one of the world’s largest producers of liquid packaging
board. Replacing their old quality control system (QCS) on board machine KM 8
with a modern Valmet IQ system with three scanners, has cut the time of grade changes by 25%. KM 8 is the biggest liquid packaging board machine in the
world, with a production capacity of 465,000 tonnes of five-ply board coated three times on the top side with a starch application on the wire side. 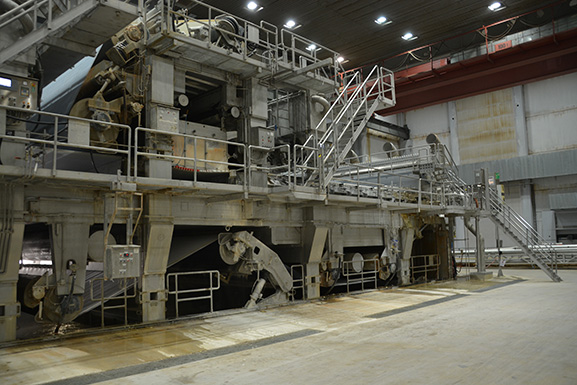 In addition to the project group, a reference group that included process operators was created to make sure that all the important matters were taken into account. Requirements were listed, and in order to give potential suppliers a good basis for their calculations, around a hundred machine runs were conducted to e.g. determine how long run-ins and quality changes took. We needed to shorten them using a new quality control system.”

The suppliers got all the relevant machine data to calculate the times for run-ins and quality changes as well as for machine optimization. A quality control system with the right choice of sensors to measure the relevant properties, good profile control across the machine, advanced control of property variations in the machine direction, and online retention measurements for the different board plies should make run-ins and quality changes at least 25% faster. After a comprehensive evaluation of the offers and technical solutions from suppliers, Stora Enso opted for Valmet’s IQ quality control system.

“As it is a big deal to change from one quality and control system to another, we wanted to make it as risk-free as possible,” Leif Karlsson continues. “In order to reduce the risks, we therefore split the project into three parts.”

The first part was done during the autumn maintenance break in 2012 and comprised the base paper scanner with sensors for grammage, moisture, caliper, fiber orientation, formation and color, as well as a new moisturizer for moisture profile control. A Valmet Retention Measurement device (Valmet RM3) was installed for one of the board plies to test its capability. The outcome was very positive, so Skoghall bought RM3s for all plies as they saw great potential for optimizing the chemicals used. During the first year, the operators were able to switch between the old moisturizer and existing fiber orientation control and
the new equipment from Valmet.

The second part of the project, completed in autumn 2013, was in the coating section, in which the manual profile controls of all three coating stations were replaced with a Valmet IQ Coat Weight Profiler for automatic control of the coating. Two of the scanners were installed after the first and third coating units. After the second pope reel, the grammage, moisture, caliper, coat weight and color are measured, as well as the surface moisture on both sides. In the future, measurements of surface moisture on both sides of the web can be used to control the curl.

During the autumn maintenance break in 2014, the last parts of the old quality control system were replaced. Valmet renovated or exchanged all the actuators for grammage control in the headboxes. Today, the fiber orientation of the board’s top and back plies is controlled with Valmet IQ Slice Profilers, while the basis weight control for the three middle plies is done with a Valmet IQ Dilution Profiler.

“All three start-ups have been very successful and managed to achieve approved quality after just ninety minutes,” says Leif Karlsson. “We have now been running KM 8 for more than eighteen months with the complete Valmet QCS system. Almost all our goals have been achieved, including shortening run-in periods and quality change times by 25%.”

“A QCS is a narrow competence area, so it is important to have our own people with knowledge about the system,” says Peter Grabner, who is in charge of the QCS system maintenance for KM 8. “So we have a dedicated QCS group to keep control of the system and be able to give support to the operators. One of the four teams is in turn available around the clock, but luckily most of the support
needed can be given from home.”

“All in all, the maintenance needed for the new QCS system has been considerably reduced compared to the previous situation, and of course we can easily get hold of spare parts.” 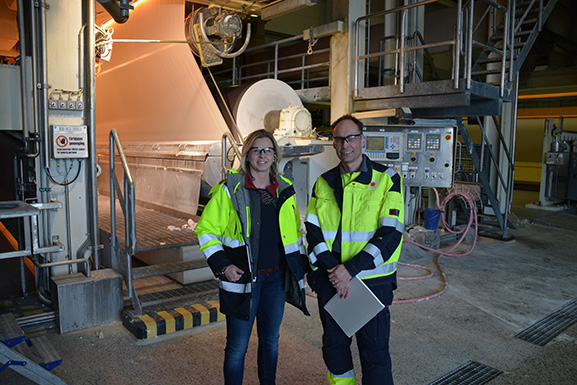 Marie Morin and Peter Grabner at a coating unit where the coat weight profile is now automatically controlled.

“Excellent support every step of the way”

“The total investment was roughly five million euros, which was below our budget even though we split the project into three parts over three years,” says Leif Karlsson. “We wanted to minimize the risks. We believed – and we still do – that it was the right decision. Some money could easily have been lost if we had had problems with the new system or our lack of experience with it if everything had been done in one go.”

”We have had excellent support from Valmet every step of the way. During the start-up, experts from Valmet worked with each shift team, and we also had a support link from Finland so that any issue or problem could be resolved swiftly,” Leif Karlsson finishes. 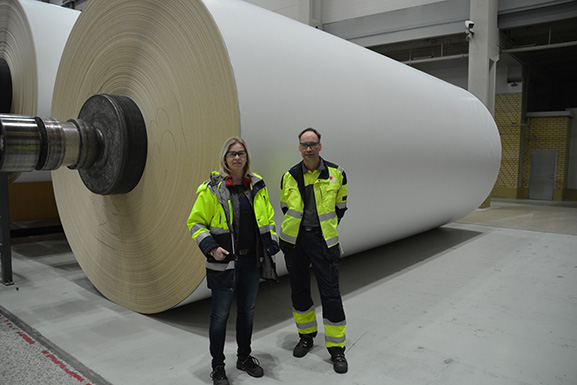 Marie Morin and Peter Grabner confirm that the installation of the Valmet IQ QCS system has been very successful. “The new QCS system is a very advanced system and there is still more to get out of it,” says Marie Morin, Production Manager for KM8.

Facts about the KM 8 QCS system