Off machine coater yield loss at the reel, a case study

A high speed off machine coater was experiencing significant yield loss generated at the reel. The result was up to 8" of paper lost due to offsets, edge bursts, and crepe wrinkles.

The reel drum had recently been reground. To make the reel drum flat, most of the shallow chevron grooving was removed, leaving only the venta nip grooves to remove entrained air.

Spare drum taken into use

This machine had no spare reel drum, so a new one was purchased. The new drum had both the narrow venta nip grooves as well as the shallow chevron grooves. The drum was also flame sprayed with tungsten carbide. 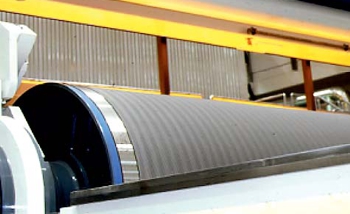 When this new drum was installed, a couple of changes occurred, both good and bad. First, the bottom losses were essentially gone. However, turnup efficiency also dropped significantly. The new tungsten carbide coating on the reel drum was too rough. As soon as the new spool would be lowered onto the drum, the paper would tear itself apart. (NOTE: This is not a common occurrence after flame spraying reel drums.)

Common underlying factors for sheet breaking during spool nipping can be an improper spool starter speed match as well as improper sheet tension control leading into the reel section. With increased traction between the sheet and the reel drum, these systems need to be tuned properly to prevent over-tensioning and subsequent snap-offs of the sheet.

To reduce the roughness, a bare spool was run on the reel at line speed for a length of time until the roughness was lowered to acceptable levels. Turnup efficiency returned to normal.

If you are interested in finding out more about compliant reel drums options or reel spool nip relieving, contact your Valmet representative.