Reeling terminology and how to achieve proper roll structure

This article will discuss how to achieve proper parent reel structure, i.e. how to make a nice tight roll that will handle being stored on the floor, run through a winder, multinip calender or off machine coater. First we'll describe what good roll structure is, then we'll review some terminology. 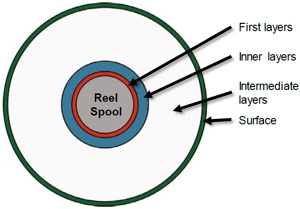 As to its structure, a parent roll built on a reel spool can be divided into four concentric sections as per the graphic.

The innermost two layer sections are the most important ones for the final result. If the reeling tightness is correct, paper layers do not slip. Paper layers slip if the load inside the parent roll exceeds the hold between the layers.

All discontinuities must be avoided. The goal is for the parent roll density to decrease from inner layers to surface or, at least, to remain the same. Parent roll structure is influenced by reeling parameters - which will be covered in a later article. No we'll review the many different terms used when reeling.

DESK CONSOLE or CONTROL DESK: An optional, stand-alone desk with panels for most reel manual controls including drives; usually located near the machine for visual monitoring but can be in a control room.

DRUM DOCTOR: A device which keeps the reel drum clean; typically either a blade-type doctor which contacts the drum surface, or an air doctor which blows the web off the drum.

DS: Abbreviation for "drive side" of the reel frame (opposite of TS). This is the side where most drives are located.

HAY: Another term for broke or waste paper.

HAY CATCHER: Horizontal panels which prevent broke and other paper scraps from falling onto the scanner during turn-ups.

HMI: Human to Machine Interface. The equipment used by the operator to communicate with the machine. This could include a touch screen with icons, etc.

OFFSET: A value which is added to or taken from a pre-determined setpoint.

PANELVIEW: Allen Bradley's human-machine interface (HMI) which is used to control the movements and functions of the machine; typically has touchscreen or button access to machine control screens; comparable in function to a monitor in a PC-based system. The HMI contains a Graphic User Interface (GUI) composed of multiple screens.

PARENT ROLL: The product of a reel. A roll of paper tightly wrapped around a reel spool. A parent roll goes through additional processes or rewinding at a later stage of production.

PERIPHERAL FORCE: Another term for torque or circular force. A tangential force affecting the web. Tightens the parent roll structure. Can be generated by the torque of the primary or secondary drive. One of the three parameters controlling roll structure.

PLC: Programmable Logic Controller; a processor which can be programmed to read the status of sensors and to energize actuators to obtain a desired control action.

PROFILING: Roll building at an angle to the reel drum at specified tension, nip load, and torque values in order to build a uniform roll.

PULPER: A vat beneath the machine for collecting broke and other paper pieces to be rendered into pulp and recycled in the paper making process. Typically, the web runs down into the pulper when not reeling.

REEL SPOOL: A metal roll onto which the web is wound during reeling operations.

REEL: A machine that reels (winds, wraps) paper onto reel spools to create parent rolls which are used later in the manufacturing process. A reel is typically used in high speed conditions, for instance where the paper comes from a paper machine or coater. Also a term synonymous with "parent roll" to indicate paper wound on a spool.

ROLL BUILDING: The process of wrapping the web on the reel spool so that the sheet is wrapped with adequate tension and pressure to create a parent roll of uniform density.

SHEET: The terms "web" and "sheet" are used interchangeably to refer to the continuous sheet of paper coming from the paper machine or parent roll.

SKEW: "Skew" in the reeling process refers to uneven loading or position of one side of the reel versus the other side.

SLAB: Waste paper which is torn from the roll, for instance after a web break or during threading.

SLABBING: The removal of unwanted paper from roll by tearing or cutting it off.

SLOPE: An increase / decrease of a particular value over a specific period of time or distance.

SPREADER ROLL: A roll whose function and design is to spread the paper web or smooth it out, typically at the beginning of the reeling process.

TENSION: The force created by stretching the web from opposite directions, one of three controlling parameters in tight roll building.

TENSION CONTROL: Controlling the amount of tension applied to the web to create a tightly wrapped roll.

TORQUE CONTROL: Controlling the amount of torque applied to the reel drum or reel spool.

TS: Abbreviation of "tending side" of the reel frame (opposite of DS). This is the side that operators typically approach or tend the machine.

TURN-UP: The process of switching the web from a nearly completed building parent roll to an empty reel spool.

WEB: The terms "web" and "sheet" are used interchangeably to refer to the continuous sheet of paper coming from the paper machine or parent roll.

For more information on reeling and roll structure, contact your Valmet representative.