This has been the case at the Navigator Company’s Cacia mill in Portugal, which has an annual output of about 370,000 tonnes of bleached eucalyptus pulp, intended for processing into specialty papers such as high-quality décor, filter, cigarette and tissue paper. In 2018, Valmet commissioned a multi-point online recovery liquor analyzer and causticizing optimizer in the causticizing plant, resulting in significant process improvements.

In achieving these goals, he sees an advantage in Valmet’s comprehensive approach, which offers analytical instrumentation, controls and an operator interface in one supplier package.

“We made a reference visit to a mill, where we saw the exceptional results that they obtained with this solution. It was the only equipment on the market with such good results,” he concludes. He also notes that the project team “spoke the same language as the operators,” thus promoting a successful outcome.

After only a few months of operation, the results of the project were seen in the increased stability of the entire process from green to white liquor, consistently higher causticizing efficiency, more stable white liquor with a higher active alkali and other operational benefits.

The mill’s controls and operator interface are based on Valmet DNA, linked to an existing distributed control system (DCS).

The process stabilization starts at the dissolver, where smelt is diluted with weak white liquor. The combined chemical components of the green liquor TTA from the smelt and dilution white liquor are measured by the alkali analyzer. TTA optimizing controls continuously monitor the TTA correlation with density measurements, and the density setpoint is adjusted to keep the TTA constant. In addition to the TTA control from the dissolving tank, the TTA is fine-tuned just before the slaker.

Once the input of green liquor has been stabilized and the strength maximized, the control of the slaker is the most critical in the chemical conversion process, because it sets the initial reaction rate, which then carries through to the causticizing vessels and the final white liquor a couple of hours later. The ratio of lime to green liquor is determined by the rise in temperature from the green liquor to the top of the slaker. This deltaT is created by the exothermic reaction between lime and water. The control responds quickly to the quality of lime feed, regardless of the source. This control is supervised in a cascade loop by feedback white liquor measurements taken downstream.

This temperature rise model is used when the slaker is not boiling. If it boils, the unknown part of the exothermic reaction energy is used to evaporate water. When this happens, another strategy must be used. At Cacia, the advanced process control switches automatically to the boiling mode to maintain white liquor quality. 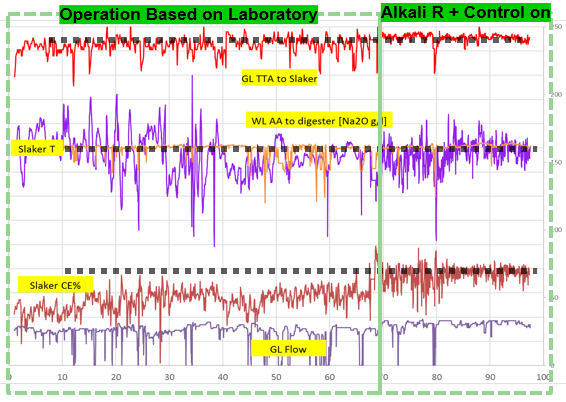 Advanced controls have stabilized KPIs including, from top to bottom, TTA of green liquor to the slaker, AA of white liquor and causticizing efficiency

The online measurements and advanced controls have stabilized the entire chemical conversion process and allowed the target shifting of key process indicators. With improved stability, overliming has also been eliminated.

Francisco Figueiredo sees the project as a success: “Valmet provided very good team support. They were always available and solved problems quickly.” Project Process Engineer Fabio Branco adds: “It was a very easy project. All the schedules were met. Navigator and Valmet worked together to solve every challenge.”

However, the improvements in the process will not end with the acceptance of performance guarantees. Heikki Imelainen, Valmet’s Senior Application Engineer, explains the project implementation philosophy: “We study the entire process when we tune any advanced process controls on the site – not only the area under control, but also all input materials and the process after the last control point.”

The mill staff and Valmet have worked together to diagnose some previously unseen process limitations which, when solved with the planned improvements, are expected to lead to further benefits and more return on investment.

The recovery of chemicals from spent cooking liquor and the accompanying energy generated from the incineration of organic material are critical operations in kraft pulping. The application of Valmet’s advanced on-line analyzer has made it possible to raise the quality and strength of cooking liquor, react faster to disturbances and increase process through put. Now, in addition to causticizing measurements and optimization solutions, the Valmet Recovery Liquor Analyzer (Valmet Alkali R) provides tools to improve recovery boiler reduction performance with its unique on-line reduction degree measurement.

Valmet analyzers and measurement portfolio includes a long tradition of pioneering innovative measurement solutions for challenging process areas. Working closely with customers and industry leaders, we have developed solutions that provide the best value in the industry.

Nippon Paper Group is one of the leading producers of paper and cardboard in the world and it's Akita mill the leading Japanese producer of paper, cardboard and pulp. Valmet implemented Valmet Lime Kiln Optimizer solution to reduce specific energy consumption and maximize the more cost efficient fuel usage.

From smelt to white liquor – the final link, SCA Obbola