At a fine-paper mill which produced coated, high-quality sheet for copier paper, the four-cylinder dryer section of its off-machine coater began to fail after twenty years of service. Years ago, the mill had been forced to change the sheet configuration to achieve satisfactory drying. However, dryer performance gradually declined and, recently, numerous sheet breaks caused by the failing dryer had threatened to close down the machine.

Productivity was down and operating cost was up. In addition to the sheet breaks, quality issues such as streaking threatened more than productivity. Customers began to ask for monthly roll inspections, resulting in six to seven rolls rejected each week. The mill even purchased a new coater in an attempt to correct its problem, to no avail.

Despite every effort, sheet breaks continued to average more than six a day for the last several months. Two of the four dryers were shut down and the two functioning dryers would need to be taken off-line soon if nothing could be done.

The machine's operating manager had been told the machine would be shut down permanently if a cost-effective solution was not found. Grinding the cylinders off-machine or replacing them were options but were too expensive and required too much time.

A team of OEM dryer specialists, called to inspect the dryer section, found the dryer cylinders badly damaged. Additionally, organic material had formed a thick layer on the cylinders, thus preventing adequate heat retention. Each dryer was out of alignment by as much as .100", causing uneven loading and surface problems on the sheet. The coater was operating at approximately 70 percent efficiency. 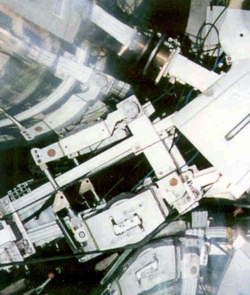 From data the team gathered, a computer model of the dryer section was created. The model allowed the team to simulate grinder installation and to anticipate any necessary equipment modifications. The dryer section was prepared, the grinder installed, five cylinders were ground and then the grinder was removed. In all, the process lasted 70 hours because of the severe condition of the dryer cylinders. Normally the process would have taken only 50-55 hours; however, regrinding still took half the time required to replace the rolls, and was done at one-fourth the cost.

After the dryers were reground, the grinder team leader asked a skeptical operating manager to change the sheet configuration back to the original specifications. 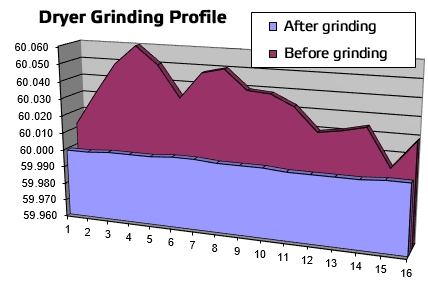 This dryer grinding profile illustrates the results achieved with the on-machine grinding service.

Results far surpassed the mill's expectations. All four dryers were returned to optimal service, the machine's speed was brought up to OEM specifications and efficiency was significantly improved. The cylinders came back into alignment within .013" because of the accuracy of the refinished shell surfaces. In addition, sheet quality improved considerably, with the number of sheet breaks and roll rejects falling to zero.

For more information about the excellent results which can be achieved with on-machine grinding, contact your Valmet representative.