The Greif Packaging mill in Riverville, Virginia, USA is a case in point. As the focal point of the PM 1 rebuild, Greif replaced an old bi-nip press with a Valmet shoe press section. PM 1 produces corrugating medium based on hardwood semi-chemical pulp and OCC furnish.

The on-time and under-budget project, which concluded in June 2015 after a 26-day shutdown, was accomplished with no accidents in more than 100,000 man-hours.

David Scott, vice-president of mill operations for Greif, summarizes the exceptional results: “Prior to the rebuild, we were either drying- or drive speed-limited. This press section project, in concert with a couple of others, has enabled us to increase machine speed by 20 percent consistently while running the 23# grade.”

He continues, “The press section has been very reliable and threading through the press is virtually automatic. All of the product characteristic goals set by the team were met or exceeded. We now deliver a much drier, denser, and stronger sheet to the dryer section, which has improved the runnability of the machine and greatly reduced its energy intensity. The press is no longer a bottleneck. All the feedback from the market has been positive.”

Scott explains the rationale behind the rebuild. “This project was based on meeting the needs of our customers, reducing the energy intensity of the operation, and modernizing the largest asset in our system,” he says. “Before the rebuild we were competing against sheets made with more modern press technology. We needed to produce a product competitive in the market place while gaining operating efficiencies.”

Regarding the press supplier selection, Scott says, “The project team selected Valmet based on the team, the technology they brought to the project, and the recent successful projects that the company had executed on similar grades.” Valmet also supplied the initial machine clothing and continues to do so today. “The project team elected to give Valmet full responsibility, essentially one source for the success of the press, and that included clothing design,” adds Scott.

The new press consists of a three-nip configuration with a shoe press in the third nip.

The project’s success at all stages was credited to meticulous attention to detail and teamwork between Greif staff, suppliers, and contractors. Mitch Heishman, technical manager and Greif project manager, describes some of the benefits of this attention to detail: “The assembly installation and start-up phases went very well due to the pre-planning in all phases of design, contractor preparation, and Valmet project group’s support. The delivered equipment was very well organized, packaged, and documented. This allowed to easily confirm that all equipment was on site prior to the start of the assembly.” He says the Valmet press section footprint was an advantage when fitting it into an existing machine. Only one dryer can was removed.

Scott adds, “Our project team was committed to the aspiration of a perfectly executed project and Valmet did not hesitate to commit the resources required to support that aspiration. Valmet has provided the resources needed at each step during the project, including field engineering services to study machine imbalance, and to collect field measurements for equipment design.”

The new press section overcomes limitations of the old press, by increasing the sheet dryness and saving drying energy, closing up the long open draw to the dryer section, and providing a stable center roll sheet release. The new press consists of a three-nip configuration with a shoe press in the third nip.

The project team selected Valmet’s new uhle boxes with perforated covers rather than the traditional slotted design, and a hard ceramic coating. They provide better felt dewatering at lower vacuum levels and less drag and wear on the felts, leading to longer felt life. 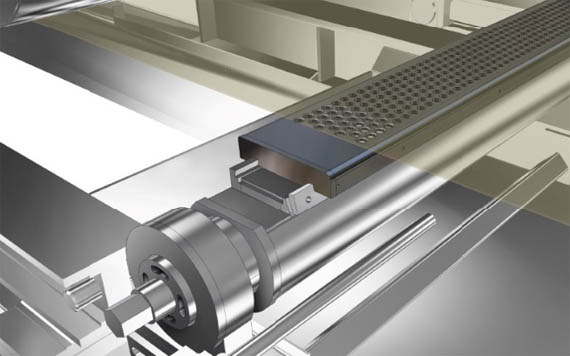 Productivity up, energy use down

Sheet dryness to the dryer section is much improved—from 41 percent to 48 percent—thereby saving a significant amount of drying energy. Specific energy consumption was reduced by approximately 10 percent over the whole mill and 25 percent on PM 1, based on the lower evaporation load. This lowers the cost of energy per ton of board produced.

Production speeds are over 20 % up on the 23# grade. Since the press startup, the mill has set new production records—over 100 t/d better. Once the mill has corrected a dryer felt roll imbalance problem, the speed is expected to be 30 percent higher, with a target of 3150 fpm (960 m/min).

The mill also targeted quality test improvements, and that has been achieved. With the denser sheet, caliper has been lowered, and that contributes to better runnability on high speed corrugators. The target for higher tensile strength has been met. Lipscomb adds, “We are able to meet industry strength properties at higher production rates than previous.”

Both Scott and Heishman agree that the new press has given the mill extra capability for increased productivity—in fact, more than expected. The mill can leverage this capability by targeting improvements in other parts of the machine, to improve efficiency and meet customer needs. After the press installation, Valmet blow boxes, a new UnoRun section, and optimized section transfers were added to the dryer section to stabilize the sheet at the higher speeds.

A summary of the rebuild results:

Valmet’s rebuild studies provide deep insight into bottlenecks and capacities for a well-planned rebuild that will meet the targets set.