To this end, the mill decided in 2016 to purchase a Valmet Sludge Dewatering Optimizer (Valmet SDO) solution to stabilize the process and improve boiler operation. Integrated to the existing Valmet DNA distributed control system, which was installed in 2007 to control effluent treatment, the software package was accompanied by a Valmet Total Solids Measurement (Valmet TS) microwave transmitter to measure the total solids amount to sludge dewatering.

“Sludge comes mainly from the two deinking lines in addition to effluent treatment as well as PM4 (LWC) rejects. It is quite constant but sometimes changing with according to recycled fiber quality and ash content,” says Martin Simmler, energy manager in charge of utilities for the mill including power plant and effluent treatment. Sludge dewatering achieved with two dewatering gravity tables feeding two screw presses, after which the 60% dry content sludge is fed to the mill’s fluidized bed boiler together with wood bark to generate electricity and steam. “Dewatering is one of the biggest consumers of additives in the mill and we use alum and polymer to aid flocculation. The Valmet SDO control now stabilizes the dewatering conditions to meet the dry solids target with optimum additive addition. Also with Valmet TS we not only optimize dewatering but also it helps us to determine sludge solids to the boiler which helps with boiler operation. If we get it wrong it can stop the whole mill,” says Simmler.

Prior to installing the Valmet TS in the gravity table feed, the only indication of total solids was a laboratory test indicating the average over 24 hours from a automatic sampler, meaning that short term variations went undetected. Valmet TS is a third generation microwave solids transmitter originally designed for use in the demanding environment of a pulp and paper mill. It uses patented microwave-based technology to measure total solids content, unaffected by flow rate or color of the process stream. “We already had good experience of a similar measurement, Valmet Microwave Consistency Transmitter (Valmet MCA), in the deink plant and started with a low level loop control using the TS in 2016,” says Simmler. “Earlier we only had a flow measurement and the 24 hour laboratory average, with the continuous total solids measurement the control results were good.” Valmet SDO was started in summer 2017.

With Valmet TS, we not only optimize dewatering, it helps us determine sludge solids for the boiler.

“We have one operator in the control room overseeing the operation the fluidized bed boiler, combined cycle plant and bark handling as well as effluent treatment. Supervising sludge dewatering used to take a lot of operator time, especially during upsets, now with Valmet SDO controlling dewatering the operator’s job is a little easier. We have achieved the stable operation we were looking for and the process is better balanced leading to more stable boiler operation,” concludes Simmler. 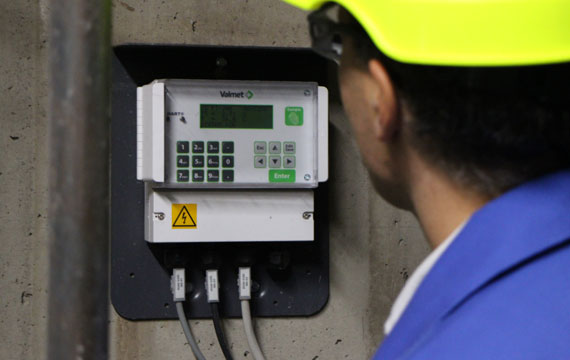 The Anjalankoski Mill area is home to two of Stora Enso's production units, the Anjala Paper Mill, as well as the Inkeroinen Board Mill. Cooperative efforts between the mills cover raw materials, energy and power generation, as well as waste water treatment and resultant sludge drying and firing.