The marine industry is very international. Also, Valmet is working worldwide. Valmet’s vision is to become the global champion in serving its customers. Our expertise in Marine is built on more than 200 years of history.

Now, legislation from the International Maritime Organization (IMO) requires vessels to reduce sulphur oxides (SOx) and other emissions. To support shipyards and owners in achieving these targets.

Finland, a forerunner in the marine industry

“As part of the industry, Finland has for a long time worked to take the wellbeing of the environment and marine ecosystem into consideration. Changes and decision-making processes have traditionally been slow. The pace of change has now accelerated due to greater awareness and stricter environmental regulations. We want to be forerunners in the industry,” says Henrik Bachér, Acting Secretary General of Finnish Marine Industries. 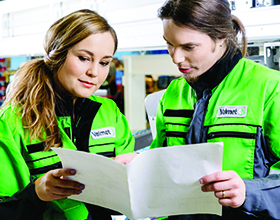 Have a look at the campaign by the Finnish Marine Industries: We challenge you to Sea the future – say yes. From Valmet, Bettina Laine, tells about her work as Project Manager.

In picture: Bettina Laine (left) and Lauri Virtanen discussing details in the project.

Valmet provides a complete set of ship automation package where all equipment and systems for control, alarm, monitoring, information and analyzing needs are integrated.