You're already well aware that evaporators are the biggest energy hogs in your pulp mill. And while the evaporators may cost you most in the energy department, they can also be where you would see the most savings in production costs. These savings can be achieved when you modernize the evaporators, making both them and the entire mill more efficient and reliable. These benefits include steam economy, condensate segregation, and scaling and availability. 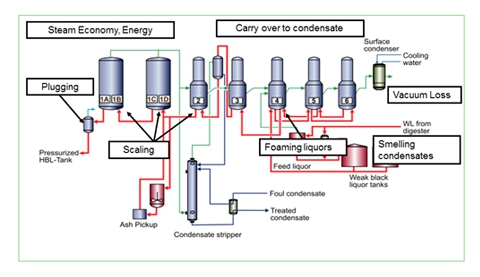 Energy savings can also be found by improving the quality of the condensate from the evaporators. Condensate is contaminated by methanol, and that methanol will be released during the initial evaporation process. By producing a larger amount of clean condensate in the back-end effects through internal condensate segregation, it can be reused in the pulp mill. Modern pulp mills reuse all secondary condensate, reducing water consumption.

Scaling is something we know you would like to avoid. The plugging of equipment, increased energy costs and especially lost production due to the downtime are things we all want to avoid. Modernizing your evaporator can greatly reduce scaling.

There is no need to buy a new evaporator, when the one you own can be upgraded. Let the experts at Valmet be your guide to upgrading your pulp mill to be more productive and energy efficient. Contact your Valmet representative.