In 2014, Hansol Daejeon rebuilt its PM 31 board machine with OptiDry Coat air drying technology. Thanks to the excellent results, Hansol decided to perform a similar upgrade on its PM 32 board machine in 2015. Removing the old infrared dryers resulted in energy savings of up to 45%. 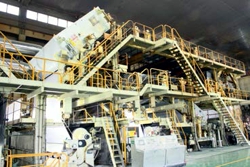 Hansol originally used steam in coating drying. With the price of steam rising, Hansol started to consider saving energy and costs by moving from steam to gas in coating drying. Hansol's good experience of gas-operated air dryers delivered by Valmet in 2008 for the back coating stations of both machines helped the mill to make the decision to go from steam to gas on PM 31 in 2014. The excellent results from the PM 31 project convinced Hansol to do the same on PM 32 in 2015.

In this case, Hansol also decided to remove the infrared dryers, which were very energy-intensive and required a lot of maintenance. Removing the old infrared dryers resulted in energy savings of up to 45%. After the project, the coating drying was completely carried out with OptiDry Coat air drying technology.

Preparations for both projects went very well. Delivery times were tight, so everything had to be checked and agreed at the early stages of the project. For PM 31, all the challenges were quickly solved thanks to very good cooperation between the Hansol and Valmet project teams. For the PM 32 order, the same teams were involved on both sides, and all the lessons learned from the PM 31 start-up were leveraged.Both projects started up on time. For PM 32, the testing time needed was even shorter as mill personnel were already familiar with the procedures. Immediately after start­up, both machines produced sellable material of good quality. 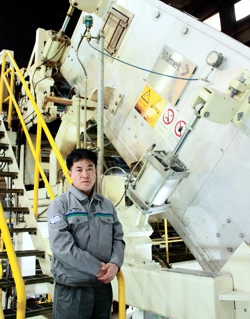 "The PM 32 order was an easy decision for Hansol. Valmet had performed very well and even exceeded the performance targets for the PM 31 delivery," says Byung Hak Choi, Production Manager at Hansol's mill.

Easy to operate and maintain

The equipment is very easy to operate. The new dryers are quieter than earlier infrared dryers and steam-heated air dryers, so noise at the coating station has dropped. Valmet used a local burner supplier for both projects to ensure that all local safety regulations were taken care of and all necessary documentation prepared for license approvals. Kuee Jun Yoo, Project Manager for the PM 32 project, states: "Maintenance has become a lot easier since the infrared dryers were removed. Also, the old air dryers with integrated steam coils often leaked. The new equipment has not needed any maintenance so far. The quality of the equipment has been very reliable."

Hansol strongly believes in Valmet's knowhow. The decision to remove the infrared dryers from PM 32 was not an easy one, but Valmet convinced the mill with the good results of the PM 31 project, showing that excellent, even superior, quality is possible without infrared dryers. Valmet's technology support was very strong in responding to all the customer's concerns before the projects. One of the key reasons for the PM 32 order was the strong support that Hansol received during the PM 31 project.

Huge energy savings of up to 45%

All targets of the projects have been met and excelled. For PM 32, the energy saving target was 30%, but currently 45% savings have been achieved. Removing the infrared dryers on PM 32 has also improved safety and reduced the maintenance and cleaning time at the stations.

The board quality is at least as good as before, and some improvements can even be seen; printability is good and visual appearance has improved. Furthermore, runnability has improved and the "folding" effect reduced. Hansol is happy with the results.

Chang Hoon Lee, Hansol's Mill Manager, says: "Hansol is very happy with the energy and steam savings at the mill thanks to these two projects. The total energy cost for the mill has been about 55 million euros a year, and coating drying has been about 15% of the total cost. These projects mean we have been able to lower the number by up to 3%. Our long-term target is that the energy cost would be around 10% of the total cost structure. Our customers' response has also been positive, and there have been no complaints about dust or mottling problems."

Production Manager Byung Hak Choi, who worked as project coordinator for both rebuilds, finds Finnish people very much like Korean people: very friendly and easy to work with. He believes that a good partnership and friendship was created: "It did not feel like supplier and purchaser, more like friends."

Hansol Daejeon in Korea is a mill that produces white lined chipboard, cupboard and folding boxboard and has an annual capacity of 630,000 tonnes. With a market share of 40%, it is the market leader in Korea. The mill was founded in 1995 when PM 31 started up. PM 32 started up three years later in 1998.

For more information on improving your coating drying process and saving energy, contact your Valmet representative.