Cleaner pulp, higher, more consistent quality and reduced maintenance. These are some of the results since SCA’s liner mill in Obbola brought its new cooking plant into operation in 2015.

We’ve also been able to reduce energy consumption in the cooking system by 30 percent,” says Andreas Vikström, Head of the Cooking and Fiber Department of SCA liner mill in Obbola.

Obbola’s previous cooking plant was built in 1961 and was a batch system with eight digesters. Despite a number of renovations, the batch digester had reached the end of the road, and in October 2015 it was replaced with Valmet’s CompactCooking G2, a two-vessel continuous cooking system. It consists primarily of the ImpBin technology for impregnation and a steam/liquor phase
digester for cooking wood chips.

“We had an incredible start-up and beat the previous production record after only five days. We also very quickly produced a pulp of significantly higher quality than before,” says Vikström. 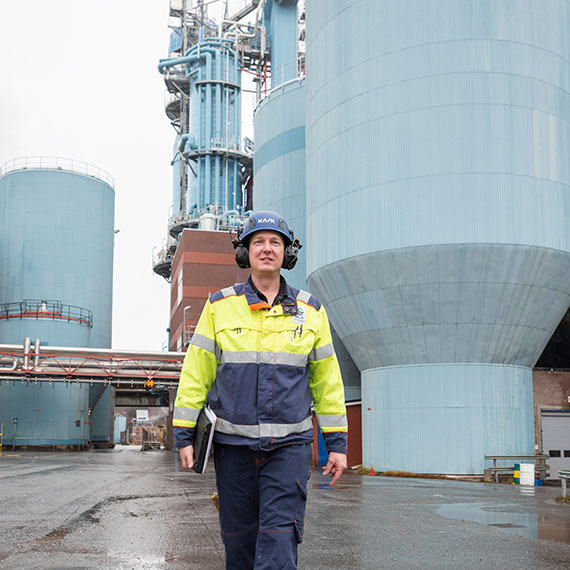 Andreas Vikström, Head of the Cooking and Fiber Department at SCA’s liner mill in Obbola

One major difference is that there has been a considerable reduction in the amount of gravel and sand in the pulp. “You always get a little bit of gravel and sand together with the wood chips, and if you don’t manage to separate
it, they are carried along in the process. Ultimately, they end up in the kraftliner, as stains when the grains are crushed in the paper machine,” explains Vikström.“We now have a much better cleaning process, and
the number of complaints about these kinds of stains has reduced dramatically,” he continues. The improved pulp cleanliness has also resulted in significant wear reduction in several departments, which has resulted in much lower maintenance costs.

The cleaner pulp also results in less deposits on the paper machine. The result: it runs better.

The pulp from the digester also contains a lot less soap compared to before. The reason for this is that the new digester is equipped with a counter-current washing zone in the lower part of the vessel, which means that the pulp washing process starts already there.
“In the past we have had a lot of issues with soap in the pulp causing operational disturbance in the subsequent washing area, but those problems have disappeared completely,” explains Vikström.
It has also been possible to reduce the dilution factor in the washing line by about 50 percent without reducing the overall washing efficiency, thus reducing the energy consumption in the evaporation by 15 percent.

Another major benefit of the new cooking system is that the quality of the pulp is higher and has become more consistent.
“There are fewer variations in the kappa numbers now. This means that we can optimize the chemical content and the refining energy in the stock preparation. In the past we have had major variations in the quality of the pulp and were constantly being forced to take this into account, to be sure that our end product would be of the right quality. That required more chemicals and more
energy compared to now when we have far fewer variations,” says Vikström.
The cellulose fibers in the pulp are now also slightly longer. “This means that the kraftliner is slightly stronger, which makes it easier to achieve the strength values that we have specified for our various papers,” says Jerry Larsson, Mill Manager in Obbola.

There has also been a dramatic decrease in energy consumption in the cooking system.
“One of the goals of the project was to reduce energy consumption by 30 percent, and we’ve managed to achieve that, thanks to the new cooking system being far more energy-efficient than the previous one. Excess heat in extraction liquors is used, for instance, for heating incoming liquors. In the past we were forced to use much more steam for that,” says Vikström.
Energy efficiency was one of the deciding factors when Obbola had to decide what kind of cooking system they should invest in. Another important factor was the overall performance guarantees given. The choice made was
to go for Valmet’s CompactCooking G2, and at Obbola they are very satisfied.
“We’ve had close collaboration and a really good dialogue with Valmet throughout the whole project, and afterwards as well. We’re still working together on some fine-tuning, and our joint activities include a project to
make it possible to extract more turpentine from the process,” concludes Vikström.

One of the goals of the project was to reduce energy consumption by 30 percent, and we’ve managed to achieve that.
Andreas Vikström, Head of the Cooking and Fiber Department at SCA’s liner mill in Obbola