The availability of the automation system is effectively 100%. There has been no loss of production worth mentioning due to the automation."
Josef Kendlbacher, Project Manager for Automation, AustroCel Hallein

AustroCel Hallein produces bioethanol from cellulose waste materials. The plant is the largest cellulose-based bioethanol plant in the world and is also Austria’s first plant for producing second generation bioethanol. The process is controlled by a Valmet DNA automation system.

The plant was built in collaboration with the German company Montz GmbH, although AustroCel itself supplied the process know-how in a number of areas. The Austrian oil, gas, and petrochemical company OMV was selected as the main customer for the product.

AustroCel has regularly supplied bioethanol to OMV since January 2021. This enables both companies to make a clear contribution to the sustainability targets in Europe. Among other things, the investment helps to reduce CO2 emissions.

The collaboration with Valmet as the automation supplier started back in the 1980s with pulp production. “We chose the Valmet automation technology for the new bioethanol plant because we have had good experiences with the Valmet DNA automation system across the entire factory,” explains Josef Kendlbacher (below), Project Manager for Automation at AustroCel Hallein. 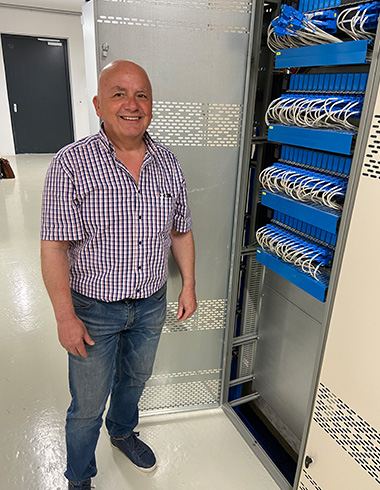 Mr. Kendlbacher has been working with the Valmet DNA system for many years. He is also very satisfied with the system in the bioethanol plant. The plant was commissioned during the COVID-19 pandemic, which had an impact on the project but did not lead to any material delays.

The ethanol production process runs around the clock. In every shift, an operator in the control room is responsible for process control as well as for doing the rounds and sampling in the plant. The operator activities are greatly assisted by the automation technology.

Valmet Service Area Manager Mustafa Began from Valmet confirms: “To successfully operate the plant, you need reliable automation and a competent operator. A fundamental requirement is naturally that the representatives of the plant operator and the automation supplier understand the application process and that they come together to discuss their insights.”

All processes, from the pretreatment of the biomass through to fermentation and distillation are controlled by Valmet DNA. This generates a huge amount of data and the goal is to collect and efficiently analyze useful data.

Valmet DNA Operate TEA, the Trend and Event Archive, is used to analyze data and eliminate errors. Mr. Kendlbacher explains: “The data are recorded in the shift, daily, and monthly reports.

“Over the years, Valmet has supported us really well with the help of the local personnel. And our expectations were once again met in this project. Automation is very important to us, as we want to make full use of the plant’s potential,” reinforces Mr. Kendlbacher.

To further intensify collaboration, the existing service contract with Valmet has been extended to include the bioethanol plant. This gives AustroCel access to the Valmet Performance Center with personalized, expert advice and other services. Valmet Industrial Internet with problem analyses, predictions of future interrelationships, and forecasts also play an important role.

Josef Kendlbacher states: “Previously, we used the waste materials from pulp production only for thermal applications. In the new plant, these waste materials are now used to produce up to 30 million liters of additional, valuable biofuel each year. AustroCel is absolutely committed to the closed circle economy.”

We chose the Valmet automation technology for the new bioethanol plant because we have had good experiences with the Valmet DNA automation system across the entire factory."
Josef Kendlbacher, Project Manager for Automation, AustroCel Halleiin

The operator activities are greatly assisted by the automation technology