Corrugated board for demanding customers

”The corrugated board we produce is often aimed at packaging requiring high quality printing which needs flat sheets and minimal impact on the outer liner to avoid washboard that effect on the print quality”, says Ola Lindberg, Process engineer at Stora Enso Packaging in Jönköping. “Our focus is on corrugated board packaging where high print quality is requested and our customers are therefore in practically all businesses. The corrugator is width of 250 cm equipped with flying splice in all unwind stands. The machine speed is 300 m/min. Our latest investment is a die-cut and flexo press for high quality printing”.

“The demands on a stable and consistent process and totally flat sheets of corrugated board coming out of the corrugator increases. Warp causes rejections or problems in the subsequent printing presses or converting machines. Traditionally we have tried to combat the problem by measuring the liner reels’ temperature profile and adjust the temperature of the preheater drum accordingly, not always giving a result which is good enough”.

“In 2013 Valmet asked us if we were interested in participating in a common project. The aim was to develop a system measuring and controlling the liner reels’ moisture profile in the corrugator and in that way eliminate the warp problem. We were of course interested. The technology exists since many years for paper machines and Valmet saw the opportunity to adapt it to corrugators, which are wide machines as well”.

“We produce corrugated board packaging with all kinds of combinations of liner and fluting qualities, such as bleached and unbleached kraftliner, white top liner, testliner, coated liner and semi-chemical fluting. The general trend regarding order sizes is that they are getting smaller and we are facing more frequent quality changes and smaller order sizes. Frequent changes of liner and fluting qualities are potential disturbances resulting in rejected corrugated material until reaching a consistent quality level. We therefore saw a potential to attain the approved quality faster after each grade change by online measuring and controlling the moisture profile of liner reels”. 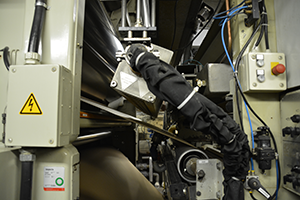 One of Valmet IQ Moisturizers installed in the corrugator. IQ Moisturizer profiler corrects all kind of warp board by adding a fine and controlled water mist in to the liners

“The first step of the development project was the installation in 2014 of a manual equipment to control the moisture profile. By optically checking the existence of warp and by spraying moist in positions where the moisture level deviated from the target value, i.e. was drier than normal, warp problems were immediately eliminated. It was a great and quick success and a clear answer to how warp problems should be solved. The following year a Valmet IQ Scanner, measuring the surface moisture of the corrugated board, was installed and in doing so the possibility to achieve a moisture closed loop control was in place”.
Today the corrugator is equipped with two IQ Scanners, one measuring the surface moisture on the backside of the corrugated board web and the other measuring the surface moisture of the top side. Two IQ Moisturizer spraybooms are installed, one correcting moisture variations of the liner side of the single face board and the other doing the same for the bottom liner before the double backer. The measurement results from the scanners control the need and positions for moistening to prevent warp problems.

Valmet IQ One-Sided Scanner measures the surface moisture across the corrugated board web.

“The result of being able to even out deviations of the liner reels’ moisture profile was really great”, says Ola Lindberg. “In 2013 before we started the project we had too many internal claims due to uneven moisture profiles. By internal claims we mean problems where too much warp has either made the sheets out of tolerance. Last year we had only a few internal claims due to a warp problem – a definite proof of the success of our new way of working!”
“Today’s corrugators are wide and there can only be three or four liner or fluting reels cut from the paper machine width. It means that two reels out of each three or four are edge reels and one edge of these reels is often drier than the rest of the reel. By using moisture control we can now compensate drier parts resulting in flat sheets. Another effect of the Valmet system is that if machine rolls are not exactly in parallel with each other, it can be spotted from the scanning of moisture profiles and corrected sooner”.

Even moisture profiles give high efficiency

“Our cooperation with Valmet has been very useful as we now have a system capable of automatically detecting and correcting moisture profiles to achieve flat sheets of corrugated board. Paper is a living material and is as such influenced by moisture changes so that it shrinks when being dried and swells when picking up moisture. By optimising the level of moisture to achieve an optimal gluing result and levelling out the moisture profile of the liner reels used in the corrugator, the corrugated board sheets are flat irrespective of the liner or fluting qualities used”, Ola Lindberg finishes.

Save fibers, chemicals & energy. Increase the competitiveness of the entire value chain from pulp, board, paper, tissue, and nonwoven making to final converted end products.

Learn about Valmet's converting references - how our customers are moving their performance forward together with Valmet.