A story of growth to market leadership – How Valmet’s analyzers and measurement devices became world number one. What ingredients ensure future success in the ever-changing world of industry?

Valmet’s analyzers and measurement devices are global market leaders in their field. Achieving pole position has not been accidental; it is based on 50 years of innovation built in Kajaani with the company’s own creativity and a precise understanding of customers’ needs.

However, five decades ago, everything started quite literally from nothing. It took a couple of visionary key people to start a business focusing on analyzers and measurement devices from scratch.

One of them was Managing Director of the eminent Finnish company Kajaani Oy and holder of the vuorineuvos title, Mikko Tähtinen. His opinion was that the company’s wood processing business activities needed to be expanded to even out economic fluctuations.

Production begins in the attic of a paper mill

Managing Director Tähtinen was inspired by Matti Otala, a professor of electronics at the University of Oulu. Otala assured Tähtinen that there was plenty of potential for electronics industry in Northern Finland. The pieces fell into place when the management of Kajaani Oy gave their blessing to Tähtinen’s proposal of a production unit focusing on electronics and operations began in 1970 in the attic of paper machine 1 in Kajaani.

Professor Otala kept his promise and helped the new unit start operation. The first product manufactured by Kajaani Oy Electronics was a wood pulp brightness measurement developed at the University of Oulu. In the early days, the product development department of the new company was first located in Oulu to maintain close contact with researchers at the university before relocation next to new production premises in Kajaani.

Taking on the world right away from start-up

When you look at the beginning from today’s perspective, the chosen path appears very logical and progressive. Director of Analyzers, Measurements and Performance Solutions, Tuomo Kälkäjä, compares the company’s business model to modern start-up companies whose success relies not only on world-class innovations but also on wealthy investors and experts of the international market to find the right sales channels for products.

“In Kajaani, the operating model was quite different from those of conventional Finnish engineering companies of the time, which involved developing a product and waiting for someone to come and pick it up from the factory. Since the beginning, our strategic policy was to target the global market,” declares Kälkäjä.

It was natural for the electronics factory founded next to a pulp and paper company to start building its product selection from devices needed by the forest industry. Back then, Kajaani was home to both a pulp mill and a paper mill, both of which had a need to improve process measurements for managing production processes. 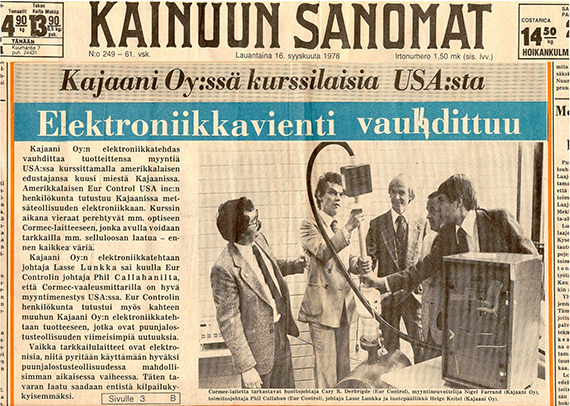 Foundation for internationalization driven by a small core group

Finnish engineers know how to develop cutting-edge technology, but in terms of selling products on the global market, they have often been overshadowed by competitors. It was soon realized in Kajaani that finding customers required an increasingly active approach not only in Finland but even more so in the international market.

In the 1970s, the company’s global endeavors were kicked off by a small core group of people with technological insight regarding customers’ needs and prior experience of operating in international markets. 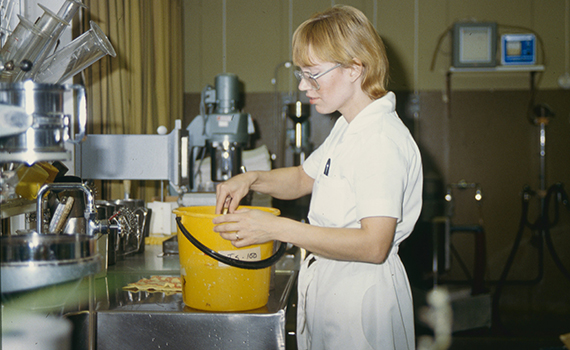 Everything starts from the customers’ needs

A focus on solutions and an operating model based on performance guarantees and consultative implementation became the Kajaani-based company’s competitive advantage already in the 1970s and 1980s.

“Analyzing the reachable customer benefits became a key component in sales efforts. These included savings in chemicals, user-friendliness of the devices, consistent end-product quality, and minimal emissions to the environment,” lists Jarmo Koskinen, who worked for the company from 1981 to 2015 in different managerial positions in Kajaani and the United States.

One particularly notable leap in internationalization took place in the early 1980s as the company founded subsidiaries in Atlanta in the USA, Montreal in Canada and Munich in West Germany. In the latter half of the decade, the network was complemented by opening an office in Japan, where the company had already been conducting business for several years.

“Another essential factor was that personnel from the Kajaani product home took part in the internationalization process. Because of that, newly learned customer and process information could be quickly transferred to all parts of the organization as shared know-how. That was not possible for our competitors to achieve,” states Jarmo Koskinen.

The guru of pulp bleaching

In 1983 through corporate reorganization, the Kajaani industrial automation group became Kajaani Electronics, owned jointly by Kajaani Oy and Valmet Automation Oy. The following year, the company was transferred completely under the ownership of Valmet.

Jarmo Koskinen says that the entire Valmet period in the 1980s was successful. The product range developed and became more diverse, and there was good demand for the products.

“Back in the 1980s, Kajaani was seen as a guru and top expert of bleaching stage control. The Kajaani brand reached global recognition and we were naturally proud of that,” says Koskinen.

Arvo Rahikkala worked in Kajaani from 1975 to 2018, for the most part in various product development managerial positions. In his opinion, the company’s strengths have always included the ability to speak the language of the management and engineers of its customer companies and see things from their perspective. Quick problem-solving was also one competitive advantage. A key aspect of this was the flat hierarchy of the company’s own organization and good co-operation across organizational borders. 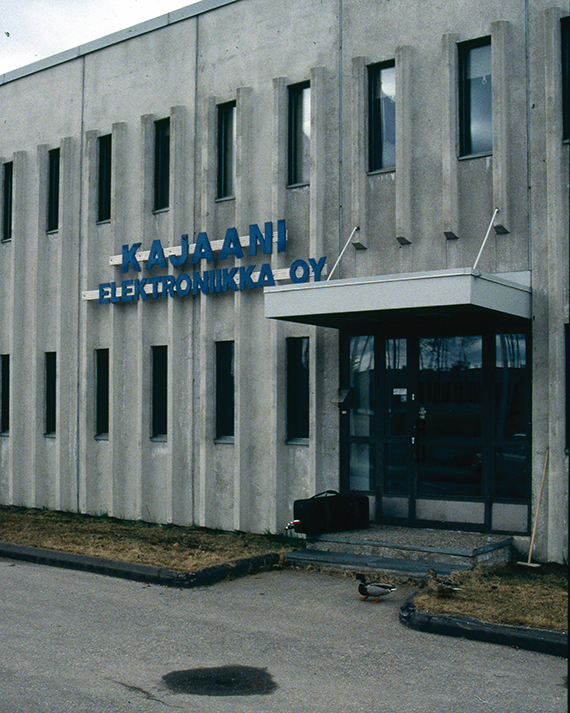 Retaining the operating model despite mergers

Kajaani Electronics continued its operations until 1993 when it became part of Valmet Automation’s Process Measurements business unit. In 1999, the signs at the Kajaani product plant were replaced with those of Metso Automation as the paper and board machine manufacturer Valmet merged with Rauma to focus on fiber technology, mineral processing, and flow control solutions. Thus, the Kajaani business unit became part of the global Metso Group serving the process industry.

In 2013, Metso was split into two separate listed companies, Metso and Valmet. As a result of the corporate reorganization, the Kajaani business unit became part of the reborn Valmet Automation business line two years later.

Tuomo Kälkäjä says that the company’s operating models have been harmonized in mergers.

“In turn, being part of a larger group has given us broader shoulders and leverage that we have been able to utilize. These things have gotten us through difficult times, such as those when global economic crises have slowed down markets.”

From the Valmet Group’s perspective, the Kajaani center of excellence is an important part of the whole serving customers in the pulp, paper, and energy sectors.

“In the grand scheme of things, the analyzers and measurement devices manufactured in Kajaani play a highly significant role. Our overall product selection is extensive enough to set us apart from the competition. As we have all the devices in our own hands, we are able to give a certain performance guarantee for process production efficiency and quality,” explains Juha Koistinen, Vice President AUT CMS BU, in charge of Valmet Automation’s pulp and paper business activities.

Koistinen thinks that five decades at the global top of the field indicates that the Kajaani company has managed to constantly accumulate and develop the necessary know-how. The achievement is made especially notable by the fact that the success was built in Kainuu, outside the conventional growth centers and far away from the target markets.

“Global competition is tough and keeps getting tougher every year. However, the Kajaani company has always been able to renew itself and stay a step or two ahead of the competition with new innovations.”

Long-term product development and products that outperform competitors form the basis of the company’s success. However, Tuomo Kälkäjä points out that measurements and analyzers are not enough by themselves.

“The benefit to the customer comes from the fact that measurements and analyzers enable pulp and paper mills to manage and control processes to make them more efficient. This also ensures that the product being manufactured always has a consistent quality.”

Technology Manager Mikko Haapalainen, in charge of Valmet’s functions in Kajaani, says that the Valmet brand is well known among customers. Customers rely on the products and services, knowing that they will receive the solutions they are looking for.

“This trust also makes it easier for us to introduce entirely new products on the market. On the other hand, expectations towards the market leader are high. We cannot release unfinished products. Product development requires plenty of testing before the quality of the product is high enough to meet the expectations set for it,” comments Haapalainen.

Closely involved in development in the future as well

Over the last 20 years, the technology related to analyzing and measuring has advanced in leaps and bounds. Good examples of this are new camera and optical technologies.

“We are able to provide customers with solutions that would have been too expensive or technically impossible just a decade ago. The rapid development of technology will continue in the coming years and we intend to be involved in this development.”

In particular, the increasing advancements in digitalization are opening new possibilities. Mikko Haapalainen says that aspects such as the digital customer experience have become important competition factors. “Customers have increasingly high demands for the usability of devices. They expect the user interfaces to be easy to use, clear and informative.”

From a device supplier to a strategic partner

Tuomo Kälkäjä’s prediction is that the role of services will become even more important in the future. Customers will want to scrutinize the production process or parts of it and, based on jointly carried out assessments, find out things that enable them to employ solutions that improve efficiency.

For a long time, the performance solutions and optimization packages provided by Valmet have involved a business model in which the customer purchases a service from Valmet. The company agrees with the customer on certain goals, and both parties commit to reaching those goals. The goals can be, for example, more efficient production or savings in the consumption of energy or chemicals.

Plenty of unutilized data at factories

According to Jari Almi, Vice President of Industrial Internet at Valmet, pulp and paper industry customers in particular have already decided that they will take their production in an even more autonomous direction in the coming years: “Autonomous functions require a wide range of different measurements. It is the only way to ensure the state of the process so that it can be taken automatically in the desired direction. The essential thing is that the measurement data is reliable around the clock in order for the automatic system to make the correct decisions.”

Jari Almi says that Valmet’s analyzers and measuring devices have a built-in capacity for utilizing the possibilities opened by the industrial internet. The devices can be connected to Valmet’s industrial internet platform and the reliability of the measurements can be ensured more automatically through diagnostics solutions and remote connections.

“In the future, we will be able to create tools such as various prediction and optimization models with which production as a whole can be controlled better than before. Increasing the efficiency of processes can bring the customer considerable cost savings. Our success is based on the fact that we have been doing things well for a long time. We promise to continue to strive to do things even better and, together with our customers, keep the bar high,” Kälkäjä concludes.

We in Valmet believe that analyzers and measurements are the key cornerstones for successful process controls and optimization. We offer a wide portfolio of analyzers for different pulping and papermaking process needs.