In today’s economic times, the idea of shutting down a Yankee dryer and rebuilding it seems difficult to imagine. There are certain times, however, when a mill has to bite the bullet and make a major rebuild to save its manufacturing operation. Although this is not an action most mills in general and tissue papermaking mills in particular like to make, one mill made this decision and is now reaping the rewards of its bold decision.

The mill that made this decision had faced problems with its Yankee dryer for some time, and had actually taken some stopgap measures to rectify the poor quality of tissue coming out of the Yankee. The mill had even investigated the possibility of installing a new tissue machine, but this was far too costly. It felt that a rebuild of the Yankee was its last option.

So why was this mill so reluctant to undertake a major rebuild of their Yankee dryer? There were two major reasons for this reluctance.

First, the U.S. Occupational Safety and Health Administration issued a series of administrative directives and regulations that make it very difficult, if not nearly impossible, to perform a rebuild that requires lock-down entries. Confined space entries require a multitude of safety measures that can seem to be more of a hassle than they are worth.

Second, rebuilding the internals of a Yankee dryer requires a significant amount of downtime. Most mills cannot afford this amount of downtime, and tissue mills will only take this downtime as a last resort because tissue consistently makes money in today’s economy.

Given these considerations, it seemed very unlikely that the mill could overlook these obstacles and decide to rebuild its Yankee. But the mill found itself in a difficult predicament. Despite its best investments of time, equipment and money, the quality of tissue coming out of the Yankee dryer was unacceptable, while the rest of the manufacturing operation seemed fine.

The steps leading up to the rebuild decision showed no inconsistencies or shortcuts.

Analysis of the tissue-making process showed that poor quality was a direct result of Yankee dryer problems. Specifically, the mill decided that the stiffness and vibration problems associated with the Yankee were of such magnitude that rebuilding the dryer was the only viable option.

Valmet service technicians took thermographic measurements of heat displacement during machine operation to illustrate the scope of the Yankee's internal problems, but the decision-makers were more concerned about the downtime than the thermographic measurements. The mill knew from asking second, third, and even fourth opinions of the machine’s problems that the rebuild was the only choice. 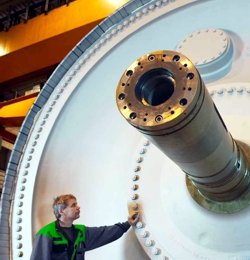 Before moving forward with the rebuild, Valmet service technicians told mill personnel that the rebuild was not only a major capital investment, but also an “act of faith.” Why? Because there was no guarantee that the rebuilt Yankee would operate properly when the old equipment was removed, the new equipment was installed, and the operator turned on the “new” machine. The mill had no guarantees of success.

Knowing that it had to rebuild the Yankee and feeling confident that this would result in a runout improvement was another matter. Mill personnel were skeptical about the expected results, and rightfully so. Fortunately, the rebuild of the machine using Valmet equipment and instrumentation proved very successful.

Although Valmet is willing to put its reputation on the line in a series of comparisons between “before” and “after the rebuild” results, the mill is leery of putting this information out for public consumption. Suffice it to say, the mill bit the bullet and the results speak for themselves. The mill is still operating, the rebuilt machine is still running, and the tissue people are no longer complaining about poor product quality coming out of the Yankee dryer.

For more information on rebuilding your tissue machine components, contact your Valmet representative.

About us in North America