Coater beams will deflect due to coating temperatures, paper temperatures and the temperature of the environment. Newer and wider coating machines are equipped with beam heating/cooling chambers that can be controlled to maintain a straight beam and hence better coat weight profiles. 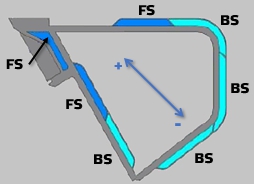 The beam deflection can be influenced by differences in its zone temperatures. In this case, the back side zone temperature (away from the roll) can be reduced a couple of degrees or the front zone increased by same amount. Either way, the blade beam center will move more toward the roll and remove more coating in the center, and add coating to the ends. Normal temperatures for front and back zones are 95-105 °F. The difference between the two zones is normally only a few degrees.

Modern, wide coaters are equipped with laser diodes that measure the straightness of the blade beam. Laser diodes are mounted in the center of the beam pointed toward the front and back of the beam. Detectors are mounted at the ends of the beam that measure where the laser is pointed at. As the beam deflection changes, the feedback from the laser contact positions on the receiver are used to close loop control the temperature of the two beam heating zones. Coaters with laser beam straightness systems need to monitor laser intensity to maintain control of beam straightness. When the intensity drops below 50%, it’s time to start thinking about cleaning the laser/targets or replacing them. Some of Valmet's modern coaters are even equipped with three air bags that are used to maintain a straight beam based on the laser feedback.

About us in North America