90 years and counting: the history of tissue handkerchiefs through the worlds largest collection

Everyone has one in his or her pockets in most countries of the world, regardless of age, gender, status or cultural differences. It is something you really don’t think of very much, unless a sudden bout of flu hits you or you need to quickly remove some melting ice cream dripping on your t-shirt. Meet Silvio Fioravanti, a collector of tissue packs who has over 16,000 tissue packs.

Silvio Fioravanti, a young archeologist from the Garfagnana area in Tuscany, has brought this humble and everyday object to an all new level of relevance, focusing not only on its mere purpose, but also on the historical and sociological implications that the use of pocket tissue has been representing in society since disposable handkerchiefs where put on the market.

On the other side of the ocean, in Neenah, Wisconsin, Ernst Mahler, employed by Kimberly Clark Corporation, invented cellulose wadding in 1914, which was first put into use during WWI; this product was also used for feminine hygiene products, and then as facial make-up remover under the brand Kleenex. As most of the people ended up utilizing it merely as handkerchiefs, in 1932 Kimberly Clark started producing an actual portable pack filled with pocket tissues to be used this way.

Silvio has started collecting handkerchiefs packs as a kid, about 25 years ago. He remembers not wanting to use one specific pack he found at home, as it had a nice drawing of a butterfly and some writings in a foreign language. That became his collectible number one. He started this collection as items were very common, easy to find and not expensive, which - for a kid – is an important aspect.

Over the time he was able to put together an astonishing 16,000 pieces from about 80 countries, which granted him the listing on the Guinness Book of World Record for the largest tissue pack collection in the world. He has carefully organised his collection in boxes, each item has been registered on a database with a picture, so everything is easily reachable.

Given his background and profession, Silvio is particularly interested in the history of pocket tissues. He has several historical pieces dating back from the 30s onwards. As there are no catalogues, it is difficult to find a missing piece, but at the same time this quest is a continuous discovery, sometimes filled with unexpected surprises.

​​​​​​​Apart from the requirements determining the handkerchief quality like softness and resistance, it is usually the packaging that identifies each product, with different graphics and information, characterising the country of origin, the historical period and thus providing us with peculiar information on the related culture and society.

The collection is an ongoing project, as he cooperates with different paper mills all over the world - a goldmine for him - which are glad to provide him with specimens of their latest products. At the same time, Silvio is in touch with the (not so many) fellow collectors around the world with which he shares information and items. He is focusing on the specimens which are currently out of production, as it is virtually impossible to keep up to date with the current production at a global level. The most precious missing item is the original 1929 Tempo pack which contained 18 pieces. If ever still existing somewhere, it will not be an easy job to get hold of it, but Silvio is still pursuing his goal. 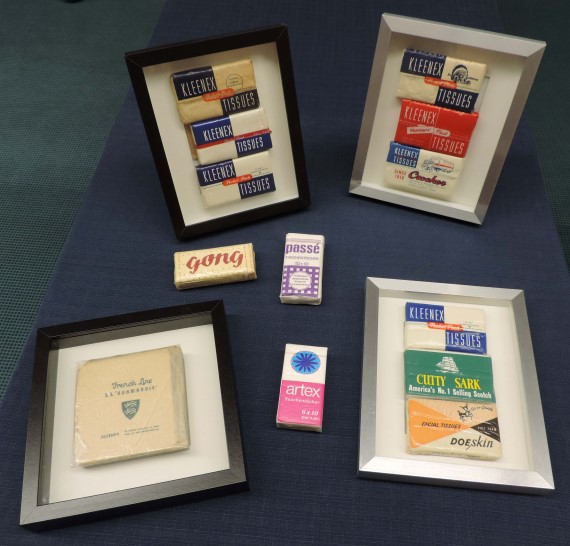 The collection, or at least the most precious part of it, travelled around the world and was exhibited at Tissue World in Barcelona and Miami and had its golden moment when an exclusive exhibition was organized at the Fondazione Giuseppe Lazzareschi of Porcari (Lucca) – Italy, in the heart of the Italian Tissue production area. Here about 3-4,000 items were displayed for several months, accompanied also by a Catalog which ensured an even wider visibility.

“I am very grateful to the Fondazione – adds Silvio – as this exhibition, together with Tissue World, drew a lot of attention on my collection. Since then, my contacts with different mills have increased. Before, my collection was considered a bit bizarre, but then more and more people started showing interest on what is behind a simple handkerchief, and I consider this a success.”

A handkerchief is something of everyday use, that might not raise interest and it is very easily disposed of. Silvio Fioravanti was capable of giving back a value and a dignity to this modest item. Not many people are aware that there is a history also for handkerchiefs: in this world dominated by a disposable culture and in papermills, where evolution is a constant, preserving a memory of the past confers a huge value added to something which is still always present in our lives.