Until the recent EU directive Best Available Technology update, there has been relatively modest requirements for condensate leaving the condenser to the environment. Typical requirements have included often only suspended solids, pH-value and temperature requiring very little treatment for condensate. The new BAT update on IED directive, which will be valid from 2021 onwards, will tighten environmental limits the for condensate significantly. Especially heavy metal-limits stated in BAT daily average values are below amounts allowed in normal drinking water we all use and requiring more modern treatment for the condensate. 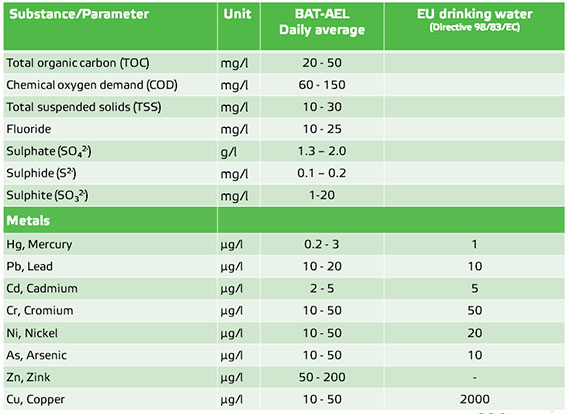 The BAT limits in general are listed in the table above, but the various exceptions for different conditions are not presented or discussed as the deep dive in the directive would require an article on its own.

The new limits require in many cases capital investments from owners of existing flue gas condensers and will increase the investment cost for a new flue gas condenser process. However, besides increasing sustainability of the power plant, it's possible to turn the new investment in condensate treatment into efficiency improvement with payback-time.

Flue gas condensing is applicable technology for wet fuels, regardless of the fuel quality. As long as there's a boiler producing flue gas, condensing solutions can be applied. This is also the case for condensate treatment and condensate even from very demanding fuels can be treated to meet environmental limits and to be used in a sub-process to support sustainable production and generate savings. The utilization of flue gas condensate can be very feasible if there's a lack of usable water or if the cost of water is high.

Clean condensate out of municipal waste

Following case example is from municipal waste firing combined heat and power plant in Finland with time frame of a bit over 1.5 years. The flue gas condensing unit is used mainly for heat recovery but also for removing the last part of emissions after the main flue gas cleaning process.

The boiler has fuel power of 221 MW and with flue gas condensing unit 14 MW extra heat is recovered to district heating network. Weight Adjusted Cost of Capital (WACC-%) is set to 8.00 % and other unit prices are listed in table below. Especially noteworthy unit costs are tap water (municipal water) and sewage charge. Tap water from the water network from local municipality is used to produce boiler water and in other processes, including for example cleaning. At the power plant if the cleaned condensate is lead to the sewage, the plant must incur sewage charge per every cubic meter. This alone provides strong incentive to use the cleaned condensate in a process rather than draining it to sewer.

Following chart presents the actual heat recovery and cumulative revenue for the selected time frame. During winter months, the heat recovery has operated at maximum capacity and even beyond the design point heat recovery. The achieved heat recovery is a combination of various factors with main variable being fuel moisture content and district heating return temperature. Of course, the demand for heat to the district heat network and power plant operation philosophy have effect on their own. 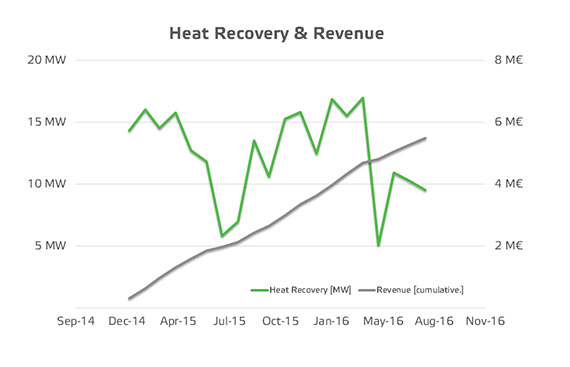 During summer months (Jul-15 & May-16) the heat recovery has decreased as the need for the district heating has decreased (luckily, we have a few warm summer months here in Finland). The cumulative simple revenue calculation approached near six million euros at the end of the calculation, leaving the payback time well below two years. Flue gas condensing is practically the only flue gas cleaning method that has an actual payback.

The process water consumption has been relatively stable throughout the year, unlike the utilization of condensate. The condensate usage fluctuation has depended on the heat recovery itself, as every 1 MW of heat equals 1 m3/h of condensate, and from the condensate treatment itself. During the time frame, condensate treatment process received some maintenance work and upgrades, which can be seen from the low points in the chart. The usage of condensate averaged around 30 % after operating at above 50 % for winter months at 2016.

The monthly cost difference for the plant process water consumption is presented in the following chart. As the plant utilized all the condensate is sub-process, the calculation does not account for the savings generated by the sewage charge costs the condensate would have incurred. The grey-line represents costs if the plant had used only municipal water in its operation and green-line the actual cost with utilization of cleaned condensate. 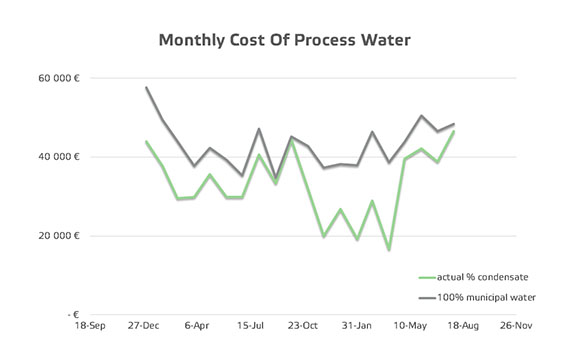 The savings generated during the time frame by utilizing cleaned flue gas condensate to replace municipal water reach a bit under 200k€ with average saving of 8200 € per month. The cost difference in the best months was a bit over 22k€ highlighting the potential of the savings when condensate treatment is operating at optimal performance. If cleaned condensate could be used for all process water consumption the figures would be roughly double. 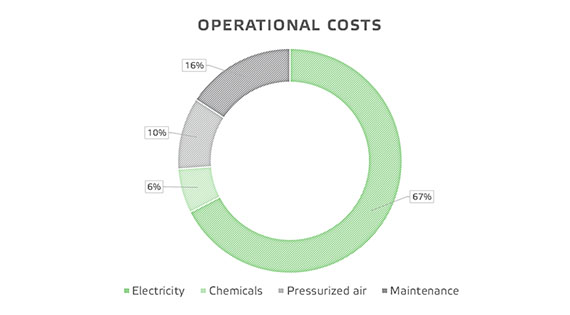 Whether you are planning a new flue gas condensing unit or upgrading the existing condensate, it's good to remember tightening requirements for the condensate treatment and possible use for the cleaned condensate. Sustainable operation and efficiency with savings are both achievable.

Save water, while saving the World