Months turned into a year and more before Valmet Sizer Roll Cover SH* was finally replaced on the sizer nip rolls of the BM 3 cartonboard machine at M-real’s Simpele mill in Finland. It’s no wonder the mill has been pleased with the cover’s excellent wear resistance, uniform profile and surface roughness.

M-real Simpele has used a ValSizer film size press in its board production line since 2006, when BM 3 was extensively rebuilt. Up until the spring of 2009, the nip rolls had to be changed every three to five weeks because the covers wore so quickly. “The roll replacement cycle was far too short, so we needed covers that would better withstand wear and deformation. The potential performance offered by Valmet’s (until Dec. 31, 2013 Metso Paper) Sizer Roll Cover SH convinced us,” says Mill Service Manager Harri Siitonen. 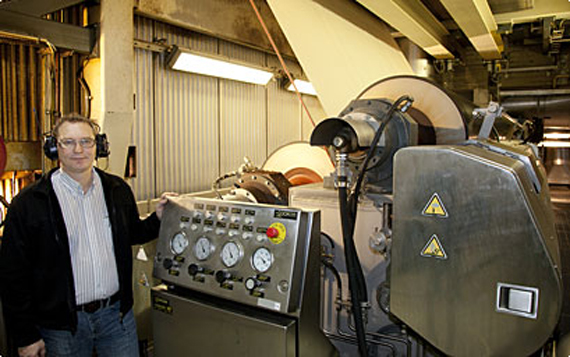 The first roll pair covered by Valmet Sizer Roll Cover SH was installed in BM 3 in the spring of 2009 and was removed 55 weeks – that is more than a year – later. Even after that long record run, the covers were in good condition. For exam­ple, surface roughness was at the same level as it was when the rolls were installed. The mill praises both the sizer and the new cover.

“It saved us from 10-15 roll pair changes on the sizer during the year. Correspondingly, the same number of roll grindings were not needed,” Siitonen explains.

Additionally, the rod bed development carried out on the sizer at the same time extended the rod bed’s lifetime from four weeks to four months, and even longer. The successful cooperation between M-real Simpele and the experts at Valmet made it possible to achieve the desired result. The Simpele mill now runs four Valmet Sizer Roll Cover SH covers. To date, Valmet has delivered about 150 Valmet Sizer Roll Cover SH covers to paper and board machines around the world.

Surface sizing with film size presses is commonly used in paper and board production to improve the surface properties of the sheet. Because it is an online process in most cases, disturbances such as sheet breaks and roll changes cause unplanned downtime. Trouble-free surface sizing and long roll grinding intervals contribute to efficient production.

The wear resistance of Valmet Sizer Roll Cover SH is excellent, which makes for long regrinding intervals. Also, the composition of the cov­er gives it greater resistance to deformation and marking, which is very important in the case of web breaks when paper wads traveling through the nip can leave marks or indentations on the roll covers.

The surface roughness of the cover is at least 1.4 μm and remains at this level throughout the regrinding interval. This yields the best possible film transfer and uniform surface sizing.