The new electrostatic precipitator (ESP) supplied by Valmet will help Oulun Energia to produce electricity and heat at the Toppila power plants with lower emissions and costs than before. 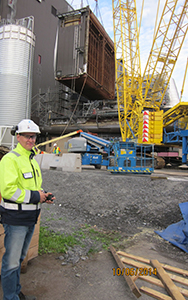 who was in charge of the project at Oulun Energia, at the Toppila 2 worksite.

In fall 2012, Oulun Energia needed to modernize its Toppila 2 power plant’s electrostatic precipitator, as the original ESP would not have met the tightened emissions regulations imposed by the IE directive. In addition, the maintenance costs for the original ESP had increased while its operational reliability had weakened. “We started by looking into various alternatives. We had the choice of either conditioning the existing ESP or replacing it entirely. After comparing offers and drawing up profitability calculations, we ended up acquiring a completely new ESP to remove the dust particles present in the power boiler’s flue gases,” explains Development Manager Mikko Vesterinen, who was in charge of the project at Oulun Energia.

“In the official tender process, we specified requirements for the suppliers, including references on similar deliveries, delivery reliability and an ISO certified quality management system. Valmet met all of these requirements and was able to make the most competitive offer, which is why we chose them as our supplier of a new ESP for our Toppila 2 power plant,” says Vesterinen.

The new ESP will help reduce the plant’s particle emissions in order to meet the requirements of the forthcoming IE directive. In addition, it will bring savings in annual maintenance costs and help optimize the management of life cycle costs (LCC). The new ESP also outperforms the old one in terms of utilization rate and availability. What also played an essential part in devising how to minimize emissions was the simulation of the process flue gas flow using Computational Fluid Dynamics (CFD).

“We will also be able to optimize the use of electricity, because the ESP supplied by Valmet can be controlled directly from the power plant’s main automation system (DCS). The ESP installed at Toppila 2 has a modern control automation system based on Valmet’s in-house product development and entirely integrated into the plant’s DCS,” adds Jukka Kurki, who is responsible for ESP sales and technology in Valmet’s Environmental Systems unit.

Oulun Energia and Valmet signed an agreement on the delivery of a new ESP in November 2013. The delivery scope included the dismantling of the existing ESP and the supply of a new one, including commissioning.

“We expected to have the Toppila 2 plant up and running again in the beginning of August 2014. From the get-go, we knew that the delivery schedule was challenging, as we only had two months to dismantle the old ESP and install the new one. We worked closely together with Valmet to reach that target. The work in preparation for the installation of the new ESP was started at the power plant site as early as in February 2014, and the dismantling of the old one was started when the maintenance shut-down began during the final week of May. Despite the tight time frame allocated, Valmet successfully completed the project on schedule and everything went according to plan. We are happy with the management and execution of the project,” Vesterinen says.

Photos: The largest ESP blocks weighed around 200 tons and measured 23 meters in length, 9 meters in width and 16 meters in height. Particular attention had to be paid to safety at the worksite due to continual lifts and simultaneous
dismantling and installation work.

In addition to the tight schedule, demanding lifts added some challenge to the installation project. The old ESP was dismantled in two large and several smaller blocks, which weighed up to 170 tons. Before the maintenance shut-down in May, the new ESP was assembled at the power plant site into two large blocks, each weighing around 200 tons. The lifting operations were carried out within a week in mid-June. This was one of the largest industrial lifting operations in Finland this year, with the largest ESP blocks measuring 23 meters in length, 9 meters in width and 15 meters in height.

Due to continual lifts and simultaneous dismantling and installation work, particular attention was paid to safety at the work site.

“Fortunately, the weather did not add to the challenge, as the winter in Oulu favored our installation project. There was hardly any snow and the temperatures stayed above minus 10 degrees Celsius almost throughout the project,” says Jukka Kurki.