Kotkamills PM2: "The best release coating we have ever had.

One of the users of Valmet Dryer Roll Cover DOH** is Kotkamills Oy in Kotka, Finland. Its PM 2 produces coated magazine paper and has a design capacity of 185,000 tonnes per year. Its wire width is 5,970 mm and current operating speed 1,400 m/min. PM 2 has been using release coatings on the first dryer section cylinders for years – partly supplied by Valmet*, partly by others.

“Valmet's previous DryOnyx ZL release coatings delivered in 2007 have served their purpose, which was to prevent the web from sticking to the cylinder. And they are still in good condition”, says Esa Elonen, PM 2 Production Manager. “The cylinders stay clean, and there are no problems with doctoring.” 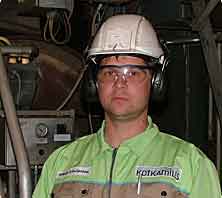 According to Mikko Vaulamaa, Valmet Dryer Roll Cover DOH coating stays cleaner than other release coatings, and there are no spots where dirt builds up.

In December 2010, Valmet supplied a new release coating for PM 2’s first dryer cylinder. The existing coating, dating back to the early 1990s, was in very bad condition. The target for the refurbishment was to improve cylinder cleanliness and minimize the sticking of the web to the cylinder surface.

”Doctoring has gone well. The blade now wears evenly and its lifetime has almost doubled compared to what it used to be. With Valmet’s Doctor Blade Carbon VE*** the blade’s lifetime is 15 days on average”, says Mikko Vaulamaa, PM 2 Mechanic Supervisor. “The coating stays cleaner, and there are no spots where dirt builds up, which was the case with the old coating. The dirt build-up in doctoring is minimal, and the web releases well from the new coating.”

“We are satisfied with the new coating. It’s the best release coating we have ever had”, concludes Timo Koskela, PM 2 Daily Supervisor, Production.