Inauguration of the biomass power plant in Zwickau

The plant was taken over in early 2014 and now it has been officially inaugurated and as per contract. A big compliment came from CEE Representative Thorsten Labrenz: “The schedule was observed, and it came in on budget. In power plant building, these are two totally decisive parameters, which you cannot otherwise recapture over a life span of 20 years.”

The new power plant is owned and operated by HKW Zwickau Süd together with ZEV Zwickau Energieversorgung as co-partner and distributor of power and long-distance heating. The project was invested by CEE (CEE Holding GmbH & Co. KGaA (Hamburg)), having a shareholding of 60 per cent, and Zwickau Energieversorgung GmbH (ZEV), which is responsible for the power supply for the city of Zwickau, with a 40 per cent stake. The project developer was Seeger Engineering AG (Owner’s Engineer) and Valmet as general contractor was responsible for production and design. 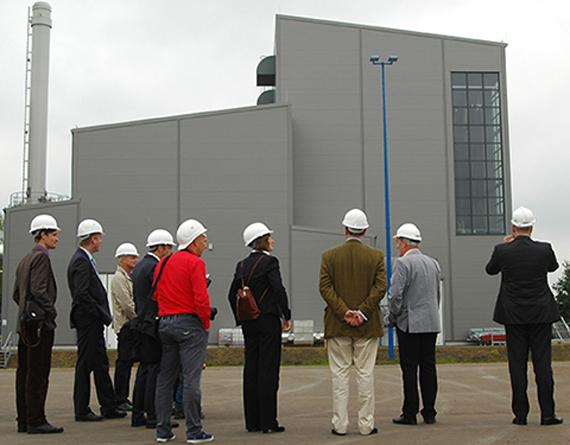 The reasons why the German company decided in favor of a Finnish vendor were explained by Thorsten Labrenz, Investment Director of Biomass at CEE and co-partner of the combined heat and power plant: "We wanted a general contractor that can build a complete power station and that is also large enough to guarantee creditworthiness."

Moreover, there is a strategic reason for the investor CEE to participate in a biomass power plant. They wanted to supplement the already existing portfolio of sustainable power sources, namely volatile wind and solar energy with base load-enabled energy production types like biomass. Wood has the advantage that it can be stored. With biomass, therefore, the exact quantity of power and heat that is required at any specific time can be generated, irrespective of weather conditions and depending on demand. For a project to be financially successful, several factors must be coordinated simultaneously and on a long-term basis.

What distinguishes Valmet as a local and global general contractor for biomass combined heat and power plants?

Valmet’s business model is characterized by local power solutions, i.e. energy that is produced in the vicinity of the end-user. A decentralized power supply with the maximum possible number of local renewable raw materials makes the production of electricity and heat in a single power station more economical. Moreover, this process offers considerable ecological advantages: the energy existing in the combustible material can be utilized in the best possible manner, which in turn reduces the emission of air pollutants in relation to the extracted energy.

Another important advantage is the almost year-round, weather-independent, 24/7 product of renewable energy. Olli Taimisto, Director Project Development, Valmet explains: "Our plants are built to a large extent on a modular form, and are based on tried and tested and standardized components that can be delivered and built very quickly. We offer our customers an extensive life cycle and repair service upon request."

The Valmet biomass power plants can use the patented BioGrate as well as a stationary fluidized bed (BFB) as combustion technology. Both were designed for the efficient combustion

of moist wood fuels with a high combustion efficiency and low NOx and CO2 emissions.

The big strength of Valmet is the prefabrication principle. All components of the power station are prefabricated in Finland and assembled into finished modules at the relevant locations. This enables the building of the combined heat and power plant in an incomparably short period, which in turn leads to very low costs.

Valmet has eight reference buildings in Germany alone. The biomass power plant existing in Leipzig is an example of a product designed for industrial customers. The essential thing is the clever exploitation of steam and therefore heat which is delivered to Porsche in Leipzig as energy for heating their painting lines.

The eight biomass power plants built by Valmet in Germany are almost identical in structure. What is new in Zwickau is the electrical grate firing drive, which simplifies the operation of the plant as compared to the existing hydraulic grate firing drive. The electrical drive in this form was introduced onto the market two years ago, and according to experience gathered thus far, it requires less frequent maintenance and has already become a standard product of Valmet.