One of the targets of the combustion optimization system is to optimize between CO emissions, ammonia consumption and boiler efficiency (boiler O2). To that effect, we have achieved excellent results. The original O2 curve would call for 2.8% flue gas O2 at full load. With our optimization system turned on, we are able to achieve a flue gas O2 measurement of 2.2 - 2.4% while staying well below the CO emission limit. The lower O2 improves boiler efficiency and minimizes ammonia consumption for NOx control.”
David Eapen, Performance Improvement Engineer, Valmet

The Gainesville Renewable Energy Center (GREC) is located in the idyllic university city of Gainesville, Florida. Construction work of the power plant started in 2010. The total cost of the project was nearly USD 500 million. Commercial use of the plant began in December 2013. The undertaking is welcome in the region since air emissions from biomass plants are distinctly lower compared with a traditional coal-fired plant. 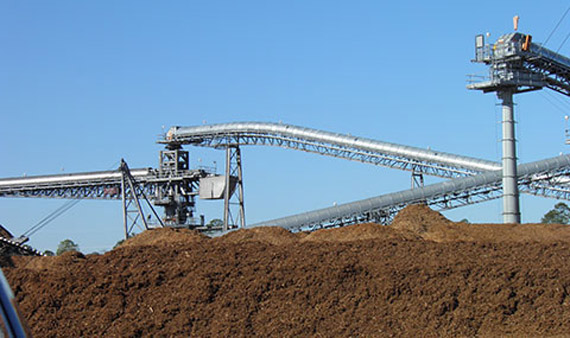 A good combination in use

The 100 MW biomass boiler delivered by Valmet uses bubbling fluidized bed (BFB) technology and waste wood from logging and mill activity, as well as urban wood waste from clearing, tree trimming and pallets as the main fuel. Green energy is created with help of the local forests.

Rod Horcoff, Reliability Manager from Valmet Power & Environmental Services, has his office at the site. He works closely with the staff of the power plant and Valmet’s Automation people. Horcoff explains that it is his responsibility to make sure that the plant operates at 96% availability. Among others, he trains the operators about the process. He says that for a new plant, this one operates at a very high availability rate.

“I have worked with boilers for some 28 years already. I really have to say that this is the finest operating biomass fired power plant I’ve seen so far. It is based on a good combination of our air system and controls. If either of them were lousy, you would not be able to run the plant this well. Emissions here are really the lowest,” states Rod Horcoff.

Daily reports from DCS to decision-making

ell Abel, Plant Manager, has been in charge of electricity production
from the start of the plant. He expresses his satisfaction with Valmet’s
automation system: “The DCS is running fine, and it works well for us. This is a
new plant, so we had the typical startup bugs. This is all part of finding ways
to optimize our operations.”

Now that the plant has been in commercial operation for a year, everything is working well. Abel emphasizes the importance of the service agreement with Valmet. “The contract is for routine and emergency service, which we rely on, and it helps us secure the availability of the plant.”

For decision-making, the management gets daily reports from the Valmet DNA system. According to Abel, the reports are often for monitoring performance purposes, but they can also identify possible problem areas. “The DNA automation system is well designed. Compared with other competitors’ systems, it is better in terms of design and support. It might have something to do with the size of the company and the fact that Valmet started in the paper industry. So, probably you have to be more supportive of the customer. With this, you have done good work,” he states.

DCS with a lot of potential

Steven Marsh, Operations Supervisor, is responsible for the power plant and fuel field. He is impressed by the cooperation with Valmet. In all, the startup was a good experience, although afterwards, he ponders on a few things that he would now do a bit differently. For instance, he says it might be worth spending more time to train one of the operators in more detail on the DCS straight from the start and to concentrate more on the alarm system.

Valmet DNA is in use throughout the entire power plant with the exception of a few departments, such as water treatment and the fuel yard. However, all the departments are tied together so that the information is collected by Valmet DNA and can be viewed and reported by the control room operators using Valmet’s DCS. Also all operations are carried out in 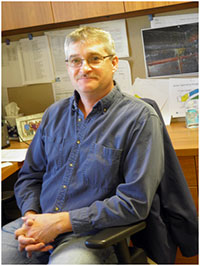 “From my point of view, the boiler island is running well. The DNA system has many capabilities, and we are learning more all the time. The automation system has so much potential,” says Steven Marsh.

“One of the benefits we have is the service contract with Valmet. Besides a
certain amount of tuning that is included, it gives us an opportunity to learn
more about the system. For example, one very important item in the contract is
the training provided on the automation system, and another part is on the
training simulator,” Steven Marsh continues.

At GREC, the boiler operation, turbine generator, wood yard, fly ash system and water treatment are simulated in the training simulator. The main target of the simulator is that the process is executed in a virtual environment in the same way as in the real process. It offers a similar platform for both training and testing.

Abel Russell brings up the role of the process simulator. David Eapen, Performance Improvement Engineer from Valmet, has designed and developed the functionality of the Valmet DNA Process Training simulator. Abel explains that when using the simulator, the operators are better prepared for any situation. With the tool, future operators can easily be trained. “The training enables really educated operators to better understand the process and also to understand what went wrong,” he states.

Also Steven Marsh appreciates the training simulator. He explains: “We realized that the location of the simulator was not the best. So, now it has been moved to the control room. The simulator makes it easy for the operators to test several scenarios. Now, they do not have to be afraid of not knowing the situation outcomes beforehand. Instead, they are now encouraged to test everything.”

Does the training simulator make the process more secure? Steven Marsh replies: “Yes, we can achieve safety and reliability so that some serious issues at the plant can be prevented. Now we have selected one of the operators to take a lead on the simulator. I believe that this will help us use the simulator to its full potential. It is a tool that will be used much more in the future.”

David Eapen is convinced of the benefits of the simulator. It is not only a tool to train new operators, but also for experienced operators to practice functions that are seldomly used. Steven Marsh states: “If one of the operators experiences something new, and the others don’t, we need to build that scenario into the simulator. That is the way to educate others, too. It allows our operators to practice for different scenarios, such as startups and shutdowns. Our aim is to operate in the best way we can. And the simulator can help us do this.”

Optimization brings the process to a higher level

According to Steven Marsh, the primary step during startup is to run the plant reliably. After getting there, the next step is to use the optimization applications to get better performance. Optimization controls really help out.

Originally, the critical parameters had been defined during the startup, for instance, the steam pressure. The triggers were built in, and the operators have learned to run the process with these. Steven Marsh: “Along the optimization, the control of emissions is important. We saw the benefits of this when we had a little problem. We called Valmet and got more information about the situation, and were then able to change the procedure.” 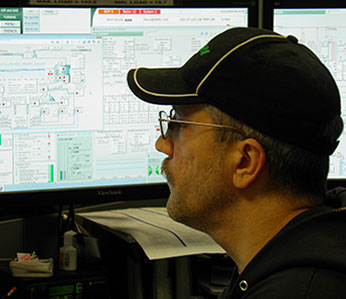 According to Joe Guetta, Lead Control Room Operator, the applications bring many benefits for the most part, and they seem to work well. Also he brings up the control of emissions to be most important. Reports about NOX and CO2 values are received. Security and better control are also achieved.

David Eapen explains: “One of the targets of the combustion optimization system is to optimize between CO emissions, ammonia consumption and boiler efficiency (boiler O2). To that effect, we have achieved excellent results. The original O2 curve would call for 2.8% flue gas O2 at full load. With our optimization system turned on, we are able to achieve a flue gas O2 measurement of 2.2 - 2.4% while staying well below the CO emission limit. The lower O2 improves boiler efficiency and minimizes ammonia consumption for NOx control.”

Joe Guetta is an experienced operator. He started to work for Gainesville at the beginning of the commissioning. He has used several DCSs, but Valmet DNA is the best from the operational point of view in his opinion. All the operators have created their own operating desktop of their favorite process windows, which they saved and can recall with two mouse clicks at the start of their shift. This is easy to do and is a standard Valmet operator feature. They are able to follow exactly those functions they prefer. 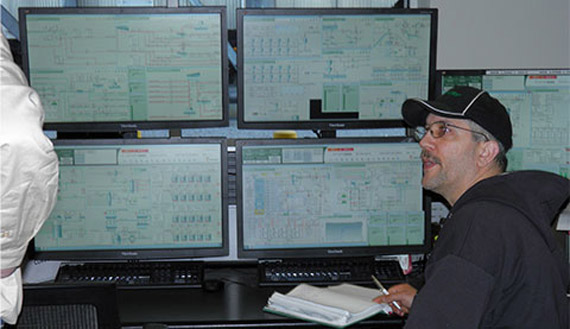 What differentiates Valmet’s automation system from the others? “As a user of the DCS, I prefer Valmet over anything I have run before for many reasons. For example, you can bring up many windows, you have drag and drop possibilities, trend graphics and detailed narratives,” Joe Guetta lists.

Joe Guetta works in the control room with his colleagues. He is especially impressed with the design of the system. “In the beginning of the shift, every operator brings forth his or her individual collection of selected windows. All the information is available for everybody, but we all have our own favorites of how to arrange the information on the display.”

In the control room, the ergonomic point of view is also important. “The colors on the displays are good for the eyes – not too bright and not too much contrast – and they don’t get blurry. You can get tired staring at the screens if the appearance of the displays is not correct.”

Joe Guetta appreciates the narratives, which are technical descriptions to describe certain areas in a very detailed manner. Typically, narratives are used during startups, but they are also informative whenever something occurs that rarely happens.

History data is available in several archives. Guetta explains how he can bring up any time scale as a trend to follow the past. Through the history data, operators and management can be educated for the future. “The archives are very informative, for instance, in troubleshooting,” Guetta emphasizes. 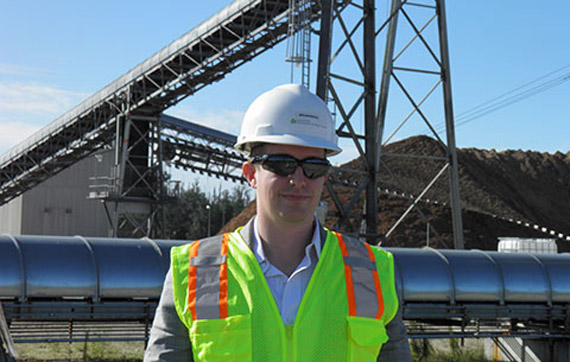 John Brushwood, Director of Communications, is responsible for public and government relations at the largest bio power plant. He often hosts local visitors. GREC has a steady position in Gainesville. It has a 30-year power purchase agreement with Gainesville Regional Utilities, the city-owned utility company, and supplies roughly 33% of the energy for the region.

Brushwood is proud to represent GREC since its fuel source is sustainable and stable, and the company supports local labor. Also, the region now has cleaner air. It certainly makes sense to encourage energy independence and rely on locally produced fuel resources. After all, GREC is world’s largest BFB with the lowest flue gas emissions – a nice achievement for the plant, for the region and for the suppliers, too.

The DNA automation system is well designed. Compared with other competitors’ systems, it is better in terms of design and support. It might have something to do with the size of the company and the fact that Valmet started in the paper industry. So, probably you have to be more supportive of the customer. With this, you have done good work."
Russell Abel, Plant Manager, Gainesville Renewable Energy Center