The biggest biomass gasification plant in the world is the one Valmet* completed in late 2012 in the city of Vaasa, Finland. Valmet Gasifier (formerly CFB gasifier) for Vaskiluodon Voima Oy was built in response to the critical need to reduce the environmental load of traditional coal-fired power plant.

By simply integrating the gasification capability with the original coal-fired plant, the investment cost was kept to about one third of a similar-sized new biomass plant. The new plant was up and running quickly and the integration process did not interfere with ongoing energy production. At the same time the full original coal capacity was retained.

By using a broad range of local and 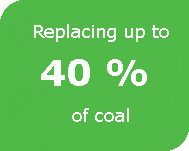 often-inexpensive biomass fuels – such as wood, peat and straw – the upgraded plant consumes one third less coal. Further, the plant generates both heat and electricity, resulting in a very high efficiency rating.