Nobody wants an unscheduled belt change in the press section of a paper or board machine. However, they do occur, and one of the most common reasons for an unscheduled shoe press belt change is cracks. When an external object hits the belt harshly it may cause a crack or a hole. Sometimes the paper side may be intact, but there may be a crack on the oil side. This is especially harmful and in the worst cases can lead to inside delamination, immediately resulting in poor web moisture profiles. This in turn causes off-spec paper quality and eventually, in many cases, leads to an unplanned belt change. Additionally, it takes time and a lot of work to clean up belt fragments left in the shoe roll.

“When the material used in the belt has sufficient toughness and good impact strength you can avoid cracks both on the paper and oil side,” says Satu Hagfors, R&D Manager, Valmet.

Valmet’s belt specialists studied what happens to belts in fast impact situations. For this they used a modified Split Hopkinson Pressure Bar testing method at Tampere University of Technology, in Finland.

In this test, a metal striker is shot onto the belt sample at a specified speed. A force cell under the sample measures the force that goes through the sample. If the sample breaks, more force goes through it and a higher force will be measured.

In case the belt material does not have sufficient impact resistance, the oil side can be cracked although the paper side is intact. This creates a risk of inside surface delamination.

In a paper machine, the highest peak pressure during normal operating conditions at the end of the shoe is below 10 MPa. “In the testing, an impact of 10 - 30 times higher pressure can be created with a small striker on the belt surface. This same phenomenon could occur in real situations if some extra material, for example a paper wad, passes through the shoe press nip. If this happens it would be no surprise that the belt sustains damage because of such high pressure and impact,” Hagfors explains.

The test showed significant differences between various belt materials and structures. The samples with the lowest measured forces remained intact, whereas the samples with higher measured forces showed cracks on one or both sides of the sample. Some samples even broke in two during the test. The Black Belt E (E for Extreme) showed excellent impact resistance compared to several other belt designs. This property also seemed to remain consistent throughout the belt’s lifetime.

A bar shaped striker hits the belt sample at a specified speed.

The tests clearly showed that the latest Black Belt E designs have better impact strength than Valmet’s earlier-generation belts and those of other manufacturers. The Black Belt material is dynamically more durable. In fact, the material was originally developed for rollercoaster wheels to provide the highest possible levels of safety in carrying people to high places at high speeds.

According to Hagfors, the secrets behind the Black Belt’s success in the tests lie in its high-performance polyurethane composition that boosts impact strength and toughness. “Because the material is tough enough, it does not crack so easily. In addition to paper side toughness, we have also improved the layer structure on the oil side.” 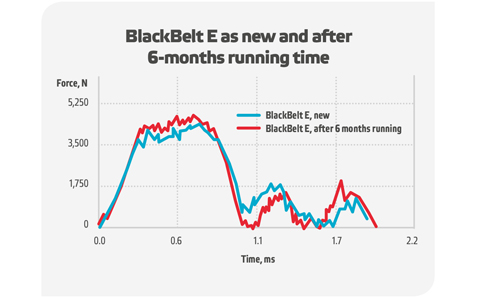 Force curves of a new Black Belt E and after six months on a shoe press running under a 1,200 kN/m load. 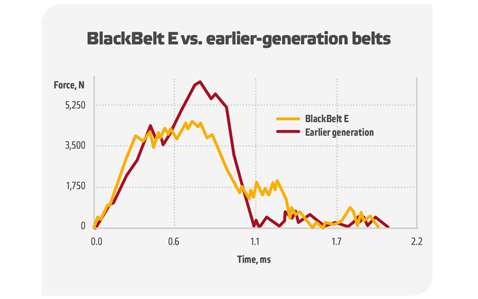