Valmet Black Belt  is an improved version of the earlier BlackBelt shoe press belt that has been very successful at paper mills around the world ever since its introduction in 2008. The benefits of Valmet Black Belt include longer life, less wear, even doctoring and better profiles. These factors all reduce the overall belt cost, which is a very important issue for mills in these economically tight times.

Machine-direction (MD) dimensional stability has been taken one step further in Black Belt in order to better address the problems related to stretching and wear on demanding machines. 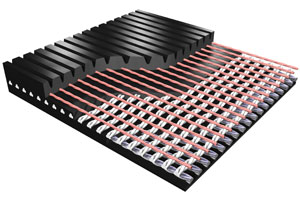 Valmet Black Belt is an improved version of the BlackBelt shoe press belt that has been very successful at paper mills around the world.

“The Black Belt features higher MD dimensional stability, which reduces the risk of permanent changes in the belt. It also has a very positive impact on wear resistance,” says Ville Lahdensuo, Product Technology Manager, Belts, Paper Machine Clothing. “Since the modulus of the reinforcement has been doubled, stretching of Valmet Black Belt is only half of that of a the earlier BlackBelt. This means that the belt remains within the operating window more efficiently, and its dimensions do not change permanently.”

Another major improvement in the new belt is related to its ability to withstand heat. Its polyurethane material endures high temperatures of up to 130°C in continuous use without degradation. The synthetic yarns that reinforce the belt structure do not soften until the temperature reaches 120°C. Belts cannot usually be used in temperatures over 80°C.

“Since the Valmet Black Belt withstands high temperatures, it can also be used in calendering and other high-temperature applications,” Lahdensuo points out.

Just like its older brother, Valmet Black Belt is available in smooth, grooved, semi-grooved, discontinuously grooved and high-density grooved designs, to fulfill the demands of each individual shoe press.

The new belt has been designed for all kinds of paper and board machines, but especially for the most demanding ones, such as wide printing paper and container board machines. According to Lahdensuo, the belt is also suitable for tissue machines. Tissue machines do not have high press loads but they do have other issues with belts. “We have received only positive feedback from the mills where these new belts are being used and each customer has been able to improve belt performance.”

The demand for all products in the Black Belt family has been growing steadily over the past years. To increase shoe press belt production capacity, Valmet recently built a new belt casting line in Tampere, Finland, which was inaugurated during the Clothing Days seminar in February 2013.

And what’s more, the Black Belt ran for 98.2 million nip cycles, which makes it the longest ever running shoe press belt on PM 62. Congratulations to everyone at Holmen Paper Madrid!