The Itata Valley in Chile is home to both wine and pulp production. Dazzling vineyards surround Nueva Aldea – a modern pulp mill that has just been upgraded with an even more effective bleach plant.

Nueva Aldea is part of the Arauco Group and has two fiber lines for market pulp production. One fiber line uses eucalyptus and the other uses pine (Pinus radiata) to produce market pulp. The wash presses had been an Achilles' heel for the mill for some time. Patricio Henríquez, Director of Arauco's Engineering and Construction Division, says: “We had some issues with the existing presses. In particular, the availability was low and we had problems getting them to run properly.” 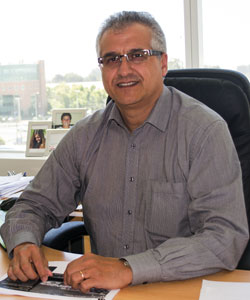 Arauco's Patricio Henriquez is very pleased with the new equipment.

A couple of years ago, Nueva Aldea turned to Valmet to replace the wash press placed before the bleach plant. The solution was a TwinRoll Evolution press. The positive experience from that press was decisive when the mill decided to replace two wash presses in the bleach plant. They turned to Valmet again, and Gunnar Viklund, Valmet's project manager, was assigned to lead the project. “We are confident in our ability to carry out these types of projects. The challenge was the unusually short delivery time. The presses needed to be installed within a window of ten days during which the mill was to shut down, so there were no safety margins,” he says.

The wash presses are TwinRoll presses, model TRPE-1540. They were delivered in July 2013 and the shut-down of the plant took place in October 2013. One press is placed between the first stages of the bleaching sequence, between the D0 and EOP stages, while the other one is installed after the D1 stage. The presses are designed for a production of up to 1,580 tonnes per day and a pulp feed consistency of 7%. Patricio Henríquez sums up the advantages of the new presses: “The main advantages of the new equipment are the high availability, the high output consistency and the low consumption of chemicals.”

The geographical distance between South America and the Nordic countries is considerable, and there are cultural differences to consider as well. But this has not impeded the cooperation between Arauco and Valmet in any way. This is not the first partnership between the two companies and neither is it the first time that Patricio Henríquez and Gunnar Viklund have collaborated on a project. Patricio Henríquez is positive about the outcome: “It has been very easy to work with everyone on the project team. We have been involved with Valmet on several projects and we appreciate that they usually accomplish what they promise. This is important to us and we feel comfortable working with Valmet.” 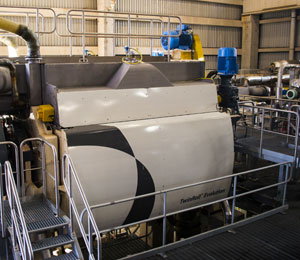 Since the launch in 2009, Valmet has sold 83 TwinRoll Evolution presses.

Valmet has extensive experience in developing and delivering wash presses. We have now reached the fifth generation, TwinRoll Evolution, that washes more effectively than their predecessors and have up to 30% higher capacity for any given roller size. The new generation of TwinRoll can be fed with pulp consistencies of up to 9-10%. Thanks to the TwinRoll presses it is possible to reduce the chemical usage of the bleach plants, which has considerable economic and environmental advantages. Money that was previously spent needlessly can now be invested more wisely, while at the same time making pulp mills more eco-friendly. Arauco's Patricio Henríquez says that this is a key issue for Nueva Aldea: “It is very important for us to reduce the consumption of chemicals, not only because of the environment but also for cost reasons.”

A textbook example of a successful project

A few months have passed since the new presses were installed. Patricio Henríquez observes that the new equipment has lived up to expectations: “I have been in contact with the mill people and they are very comfortable with the new equipment. TwinRoll is a cost-effective solution and this project is a good example of how a project should be managed. The key to the success of the project was the excellent cooperation between the mill team, the Valmet team and the Arauco Engineering and Construction Division team. We greatly appreciate that Valmet delivered these presses in such a short time,” he concludes.