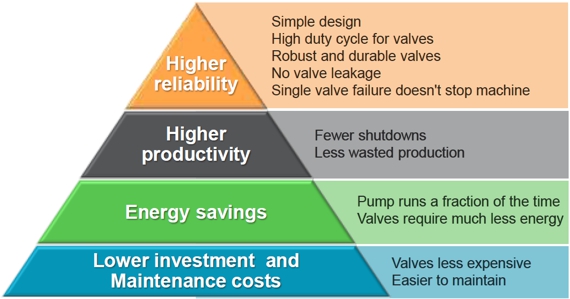 Digital hydraulics replaces standard proportional valve applications with parallel groups of simple, quick-acting, binary on-off valves. Since the poppet style valves do not leak, there is no need to have a pump running all the time. This significantly decreases energy consumption. Instead of using a large hydraulic power unit (HPU) - a small HPU and an accumulator are provided, located on the machine floor requiring no piping run up from the basement.

"Digi-valves" are mass produced, robust, small and inexpensive compared to proportional valves, which contributes to a lower initial investment and carrying cost for spares. If one digi-valve fails, operation automatically reconfigures the remaining valves for very little impact on performance. Compare this to a proportional valve failure which brings the process to a halt and can damage roll covers.

Digital hydraulic development at Valmet began at the Järvenpää facility in 2007. The first pilot machine application was built and tested. At that time there were no components dedicated to digital hydraulics. While the pilot machine automation was not suitable for a paper mill, the functionality of the system could be tested and was found to work perfectly.

The feed forward Simulink-based calculations created and used on the pilot machine have been used ever since. They have been modified to work with different sections of paper machine lines.

The poppet valve is a normally closed 2-way valve which blocks inlet flow when in the unactuated position, and passes inlet flow when actuated. The valves are mass produced, durable, and much less expensive than proportional valves. Binary programming is used in a PLC to control the valves. Ideally, the valves must be very fast, on the order of a few milliseconds to change state between open and closed.

A simple example of digital hydraulics is shown in Figure 2, where there are three valves each with a different flow capacity. By selectively turning the valves on and off, the individual valve flows are combined to form a total flow using a binary table. The valves would typically have flow rates of 1, 2, 4, 8, 16, etc. according to the binary system. The example shows a three-valve system with individual valve flow rates of 1, 2 and 4. When treated as a single unit (in this case we call it a digital flow control unit, or DFCU), the flow ranges from 0 to 7 in one unit steps.

For more information on digital hydraulics and successes that have been achieved with new and rebuilt installations, contact your Valmet representative.