The Arne Asplund Mechanical Pulping Award was established in 1985 to commemorate Dr. Asplund’s contribution to the pulp and paper industry worldwide. The Award is presented biennially at the International Mechanical Pulping Conference, IMPC. Established to promote the development of new technology for the manufacture of high-yield pulp in refiners, it is awarded to a person or persons in recognition of outstanding achievement in the research and development of mechanical pulping technology. The award consists of a gold medal and an honorarium of SEK 25,000.

Presentation of the 2018 award 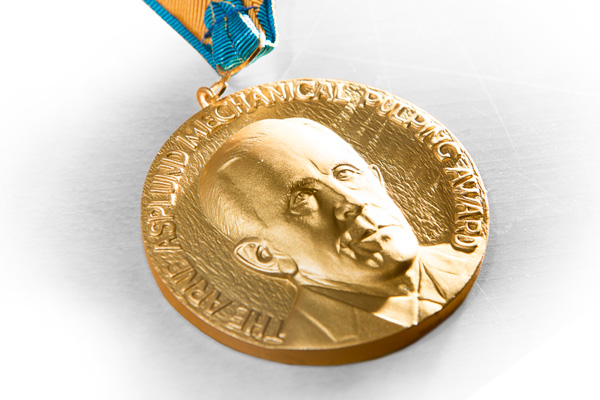 Dr. Arne Asplund is the inventor of the thermomechanical pulping technique, known as the Defibrator™ process. He developed the process in 1931, and Defibrator AB was founded in 1933 to commercialize his invention. A patent was granted in 1934.

Pilot plant trials to produce thermomechanical pulp for paper production began in the late 1950s. The first commercial paper pulp application with a Defibrator™ refining system was at the Rockhammar Mill in Sweden in 1968. This work led to the development of the tmp process, which virtually revolutionized the pulp and paper industry in the 1970s.

Arne Asplund’s professional achievements could be rated in terms of the millions of tons of panelboard, papers and paperboard that the industry can produce in its efficient and costeffective pulp plants based on his original idea. Following retirement as chairman of Sunds Defibrator in 1979 at age 76, Arne Asplund continued his inventive ways. A holder of more than 50 patents, his latest projects involved modifications of the mechanical pulping process to reduce energy consumption. Dr. Asplund died in 1993 at the age of 90.

In 1984, Dr. Asplund was awarded one of the ten prizes for technical achievement presented annually by the National Swedish Board for Technical Development, stu. Other honors include the TAPPI Gold Medal (1978), the Gold Medal of the Royal Swedish Academy of Engineering Sciences, iva (1947), a University of Wisconsin Honor Award (1954), the Ekman Gold Medal of the Swedish Association of Pulp and Paper Engineers (1956), Grand Gold Medal from iva (1969), and Doctor h.c. at the Royal Institute of Technology in Stockholm (1967). He was elected a Fellow of iva in 1957 and tappi in 1974.