The yankee dryer is a central part of all common tissue making machines and processes. Its basic design has remained unchanged for over 100 years. In the 1990’s steel fabricated yankee dryers became a viable alternative to cast iron for the manufacturing of creped tissue papers.

In this Tissue Talks we look back at some of the arguments brought forward comparing steel versus cast iron. What have we learned in the last 15 years? What remains to be further investigated? 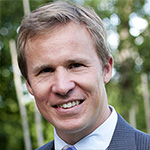 Magnus, located in the Karlstad, Sweden office, is responsible for sales and marketing of yankee dryers as well as complete tissue lines and rebuilds.

Magnus is an active member and past secretary and co-chairman of the TAPPI Yankee Dryer Safety and Reliability Committee.

Explore the world’s only complete range of Yankee solutions

We believe in freedom to choose, and therefore Valmet offers both steel and cast-iron Yankee cylinders. And we are the only manufacturer that can.