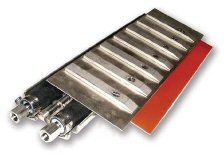 Probably the most frequent cause of doctoring problems is a failed load tube. With heat and age, tubes become brittle and will fail. Tubes are relatively simple to replace. However, check with your doctor supplier for the latest material for your application.

When applying a new tube, be sure to massage all the kinks out of the material before it is installed. The lining in some of the tubes has been known to stick together, totally blocking a tube.

Massage out all kinks in tubes before installing.

After a new tube is installed, it may grow in length for a couple of weeks before it stabilizes. After this period, the tube should be checked, and the extra length cut off. This stretched length can present a problem, depending on how the tube is clamped. If the clamp is attached to the mounting plate, the tube has nowhere to go end-wise so it moves sideways, trying to extrude through the gap between the fingers and the retainer flange. If the retainer is capscrewed on, it may shear the capscrews and bulge out. If the retainer is part of the mounting (or tube tray), it may bend the flange to free itself. This problem will show up as a wide worn area on the blade. A couple of weeks after a new tube is installed, the excess (grown) length should be trimmed off the "dead" end of the tube.

Tubes that are too small

A few years ago, one supplier provided tubing that was too small as a replacement for load tubes. If there is any of this tubing in the mill, discard it and order the proper size tubing. We have also found that industrial supply houses have been supplying "fire hose" for replacement DST tubing. The size of the tubing determines the effective loading area of the blade holder and is critical to its performance.

Doctor suppliers furnish replacement tubes of various diameters and firmness - all for the same application. These physical characteristics may show up in doctor performance. Firmness becomes a real factor when used in the unload tube. Pressure in the load tube may have to be increased to overcome the residual firmness and collapse the unload tube.

Leaks can be detected by using leak detector liquids. A massive leak, such as a ruptured tube, can be heard or felt by hand. Tubes in a holder may appear okay when actually their liner may be destroyed. If a load tube is suspected, it should be changed out.

High temperature tubing is now available for most applications. High temperature tubing provided as replacement for standard tubing in hot applications (dryers etc.) will generally have a less effective area (80-90% of standard) than original (standard) tubing. Therefore, load tube pressure may have to be raised (10-20%) to get the same blade pressure.

Chopping of the roll surface

DST holders have been known to cause "chopping" of the roll surface. Blade angles change rapidly with blade wear on this type holder. If you try to wear a blade too short, you can end up with a corrugated roll surface.

Another type of chopping of a roll surface can occur with air cylinder-stop type of positioning of the back. Loading has to be sequenced so that the doctor back is in position before the load tube is inflated. Should the load tube inflate too early, the doctor is jack-knifed onto the roll surface, perhaps taking a piece of roll cover off. Air cylinders for such an arrangement should be on mill air supply pressure.

Many problems attributed to the doctor can be found by simple inspection. A kinked or sharply bent pressure plate can be detected by sighting across the machine. If such is the case, the pressure assembly will require replacement. A spare pressure plate should be kept on hand.

Pivot brackets on the mounting plate have been known to break or come loose. This will usually result in less blade wear in the affected area. If such a condition is detected, some precautions should be taken to avoid losing parts. Either remove the doctor back and place it in the aisle with the blade holder horizontal or drape a piece of felt or sheet plastic under the doctor to catch loose parts when the pivot rod is pulled.

Whatever steps required to restore pivot brackets will have to be taken. If bracket screws loosen, use material such as Loctite to prevent reoccurrence.

Use the back edge of the doctor blade for a straight edge to line up pivot brackets while tightening pivot capscrews. 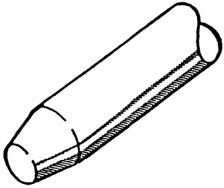 Pivot damage can be caused by installation of the pivot rod. If a pilot taper is ground on the end of the rod for about 1/2", the rod is easier to insert with less likelihood of damage to pivots.

Means for locking pivot rods in place will vary. Often collars with setscrews are used inside the first fingers from each end. They are sometimes hard to locate and remove. Often one of the tubes will have to be removed to gain access.

For more solutions to your chronic doctoring problems, contact your Valmet representative.