The previous articles in this series introduced fluids (hydraulic and pneumatic) circuit elements and described three example hydraulic schematic diagrams. This article will describe two example pneumatic systems. In each case, the equipment being moved is relatively light weight and does not have to move with exceptional accuracy, so pneumatic control is appropriate. 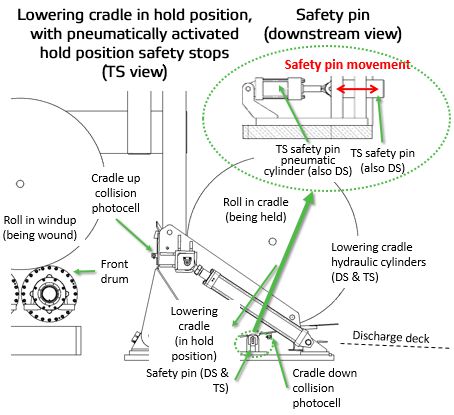 Speed of the cylinders movement is controlled by pneumatic flow control valves FCV1 and FCV2 (TS stop) and FCV3 and FCV4 (DS stop). 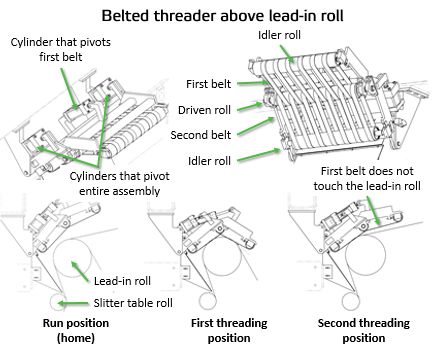 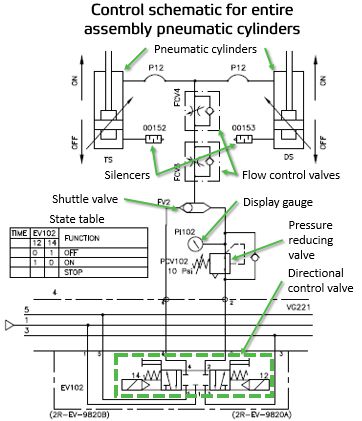 Two cylinders move the entire assembly toward/away from the web. Movement is controlled using a 5/3 directional control valve. The threading assembly will rise by energizing EV102, coil14, to allow full pressure into the cylinder rod end. The assembly is lowered by energizing coil 12 to allow low pressure into the rod side of the cylinder. This pressure is set using pressure reducing valve PCV102 to almost relieve the weight of the frame assembly but not high enough to lift it (~10 psi). The pressure is displayed on gauge PI102. Speed is controlled with in-line flow controls FCV3 & FCV4, one-way restrictor valves. 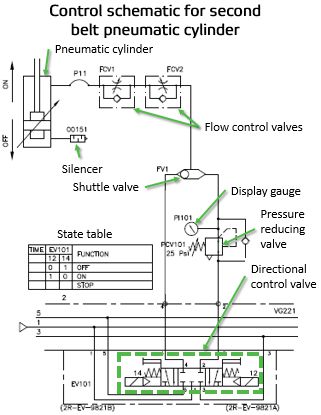 Control schematic of cylinder that pivots the first belt

Nip load is controlled using a pressure regulator. Pressure should be set using pressure reducing valve PCV101 to allow the paper to proceed forward smoothly, while still allowing the paper to be pulled out of the threading nip without tearing it (~25 psi). Pressure is displayed on gauge PI101. Speed is controlled with one-way restrictor valves FCV1 & FCV2. 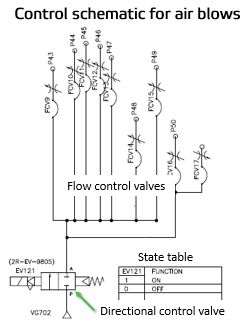 Air blows help to guide the threading tail through the winder during threading sequences. One set, called "threading" air blows, guide the tail onto and along various threading pans from the unwind to the rear drum. This group of air blows is used only during threading. The air blow design (knives, jets, nozzles, perforated pipes and sequencing) and volume of air can vary, but in this example, all threading air blows are controlled on/off at the same time, with a single 2/2 directional control valve EV121. The volume of air flow can be adjusted using a needle valve (FCV9 through FCV17) located near each air blow.

For more information about reading hydraulic and pneumatic circuit diagrams, read the previous articles in this series, or contact your Valmet representative.