This article discusses checks and adjustments that operators need to regularly make for winder slitter positioning systems. While these instructions are for Valmet slitters and the Valmet Slitter Positioning System (WindPosit system), the band/blade gap, side load force, band/blade overlap and cant angle are common factors with all slitter systems.

Read further for step-by-step instructions to safely check and adjust top and bottom slitters, as well as the importance of each adjustment. Additionally, go to Slitter Management to learn more about safe and accurate slitting.

The band/blade gap is the horizontal distance between the blade and the band before the blade is loaded against the band. An incorrect band/blade gap could result in a poor cut. The correct gap is pre-set at installation.

On the Valmet Slitter Positioning System, the band/blade gap must be reset whenever the blade unit is moved separately from the band unit.

NOTE: The gap between the blade and band must be consistent for all slitters to ensure a constant side-loading force on each slitter.

If the gap is incorrect, move the blade unit toward/away from the band unit until the appropriate gap is reached. Do this as follows:

Measuring and adjusting side load force

The blade makes two movements when positioning for slitting. First, it moves "down" (engages) toward the band, and then it makes a lateral movement (loading) against the band (as shown in the previous figure).

Side loading has a significant impact on blade life and cut quality. The loading pressure required to keep the blade in contact with the band depends on the type of material being slit. It is important that the side loading force be set as light as the process will allow: 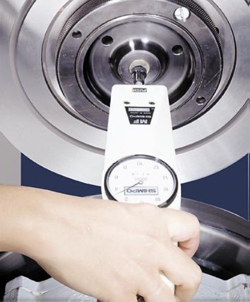 Side loading can be measured using a hand-held force gauge as shown in the figure.

The loading force can be adjusted using a pressure reducing valve. See the engage cylinder flow control knob in the operating and maintenance manual for your Valmet slitter positioning system.

Recommended sideload pressures and forces for Valmet winders are also shown in the table.

The diameters of re-ground blades and bands change, affecting the amount of overlap. If required, the position of the blade can be adjusted.

A chord gauge, typically supplied with the slitters, is used to measure the correct depth of overlap for the intended product. If you do not have a chord gauge, contact your Valmet representative for one.

The recommended overlap for various grades of paper is shown in the table.

To adjust the depth of the slitter blade:

The cant, or shear, angle is the angular relationship between the band and the blade. The appropriate cant angle has been premachined into Valmet slitter holders. Newer slitters are designed with a 0.1° - 0.25° cant angle. Older slitters were as much as .05°. The maximum cant angle should never exceed .05°. The best cant angle for a specific product is the minimum angle required to reliably slit the web.

If the cant angle is incorrect, maintenance personnel should assess and correct the problem. Possible solutions include:

To measure the cant angle: 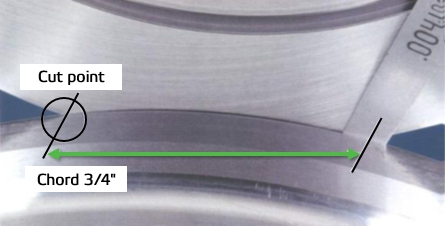