Barring is often a problem with on-line calender rolls. With Valmet Calender Roll Cover CL, material development has now taken a leap forward in barring resistance, including increased wear resistance, increased deformation resistance, plus a special base layer reduces cover shape deformation and roll vibration. Valmet Calender Roll Cover CL running time exceeds that of other covers in barring-ridden roll positions, and its barring resistance has been demonstrated on both multi-nip and soft calenders.

The cover profile after PM 12 TwinLine's running shows minimal uneven wear in the cross direction, despite aggravating factors such as high load, doctoring and abrasive SC paper. The diameter deviation of the scale is less than 100 µm.

The surface has remained very smooth throughout, even up to a Ra of 0.17 µm. Valmet Calender Roll Cover CL has managed this level of performance under harsh conditions: pressures of more than 400 kN/m and speeds of 1,130 m/min, while being doctored. 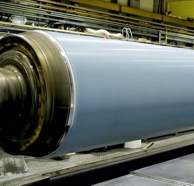 Valmet Calender Roll Cover CL extended running times are clear. A multinip calender at a North American SC paper mill achieved a running time in excess of 130 days at speeds of 1,170 m/min and a loading of 328 kN/m. This has been the longest run in this position without profile problems, according to the mill.

As calender covers are located in the physically most demanding positions in paper and board machines, they need to be durable. High-speed online calenders in particular pose a risk of cover failure, with web breaks causing very severe impacts on the cover. Valmet Calender Roll Cover CL sets a new standard in cover impact durability allowing for very high calender loads at a high nip frequency.