Our journey with engagement

In 2014 following Valmet’s first engagement survey as an independent stock listed company, Valmet set out to use OurVoice to systematically drive engagement. Now, four years later, that focus has deepened and engagement continues to rise.

When we focus, we improve

After our first OurVoice survey, we began the practice of selecting a limited number of focus areas based on the results. Instilling belief in Valmet’s future was our first ever global OurVoice focus area, which was complemented by focus areas selected by each business line and area.

We took focus area selection a step further in OurVoice 2015 by not only defining focus areas but also incorporating OurVoice action completion into our Must-Win KPIs – with quarterly follow up. At the same time, we began strongly encouraging teams across Valmet to select 1-2 focus areas of their own and work to improve.

“What we’re seeing following the 2017 survey is an action planning mindset that has moved deeper into the organization. We’re seeing more and more teams discussing, taking action and following up on their actions. It is so important that we continue to improve how well we “listen” to the feedback we’re given and use it to make Valmet a better place to work. We still have room to improve, but with each survey, the process is becoming stronger,” says Julia Macharey, SVP, Human Resources. 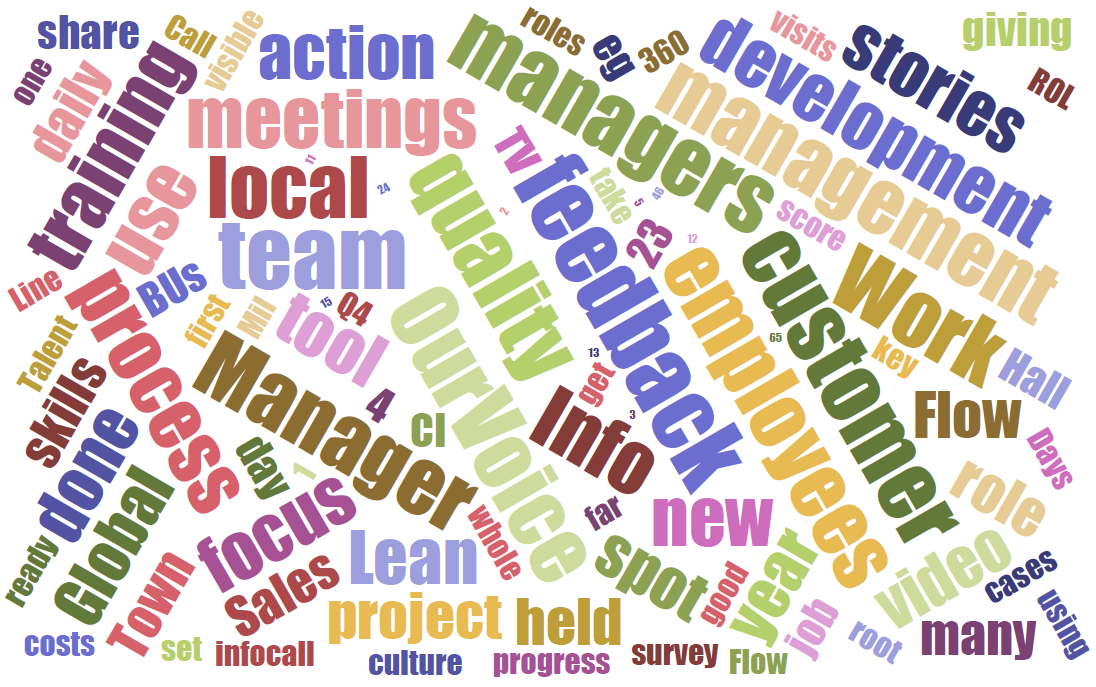 Word cloud showing examples of OurVoice actions from around Valmet

“Valmet seems to be doing an outstanding job with OurVoice!! The focus area summary slide says it all - a mix of 2 global but meaningful focus areas which can be measured, followed by business line and area focused initiatives reflecting the differentiated view that your teams have apparently taken for their own environment. It is rare that clients follow up in such a hands-on yet comprehensive way, and apparently reflects the Valmet company culture. Now the latest response rate rise is even less of a surprise, and I'm sure we will again find meaningful topics in the results for 2017,” says Pieter Schrijner from IBM Kenexa, our survey partner.

As focus area selection and action planning sinks deeper in the organization, people really are able to see and feel the impact the survey can have. Below we share some examples from the business lines and areas:

The paper business line challenged itself to improve in three areas following OurVoice 2017: increase confidence in a career with Valmet, help people adapt to changes, and highlight our values. One of the core actions that the team undertook was to begin “Dialogue with people” sessions where the paper management team sits down with paper teams, large and small, around Valmet to give insight and get feedback. The first dialogue sessions took place in Italy last autumn. The feedback from the session was excellent with ´Inspiring, very useful, a good opportunity to share our thoughts and get attention directly from paper management, a real energy boost` were some of the comments given. The target is to host the same sessions for all teams in paper by the end of 2018.

“The workshops went even better than I expected. People were engaged, eagerly discussing the questions on the agenda. We got a lot of good feedback about what works well and ideas about what we can improve together to make us a better company and place to work,” praised Jari Vähäpesola, President, Paper business line after the session in Italy.

Power of feedback in South America

The team in South America is using feedback to continue its positive trend in engagement, which has climbed from 56% in 2014 to 72% in 2015 and 78% in 2017. The focus on feedback as an engagement driver is supported by a robust action plan including a communications campaign, team building activities and quarterly KPI follow up. Valmet’s HighFive feedback channel is one of the tools they are actively promoting locally – in manager infos, team meetings, message boards and Valmet TV.

"Our aim is to build a high performance organization in all means. To make it happen and obtain desired results, all people need to know what is expected from them and follow the progress over time. In concrete terms, setting clear expectations, establishing targets, cascading  KPIs and discussing performance and need for development are all part of the cycle and serve as a backbone for the feedback process. We should also ensure that the feedback covers all aspects i.e. behavioral, attitude, in lieu of focusing only on numbers and business goals," says Celso Tacla, Area President for South America.

*all figures compared to OurVoice 2015