Regarded as the "Nobel Prize" in the field of mechanical pulping, the Arne Asplund Mechanical Pulping Award was established in 1985 to commemorate Dr. Asplund’s contribution to the pulp and paper industry worldwide.

The award consists of a gold medal and an honorarium of SEK 25,000.

The prize was awarded for the 15th time on 29 June in conjunction with the 2018 International Mechanical Pulping Conference (IMPC) in Trondheim, Norway.

The prize was granted to Professor Anders Karlström. Based on his deep understanding of the fundamentals in refining in mechanical and chemimechanical pulping, Karlström has initiated a paradigm shift regarding the theory of refining by introducing the entropy model. This new approach offers tools to understand the interplay in the refining zone with regards to refiner operation, plate patterns and the produced pulp quality. 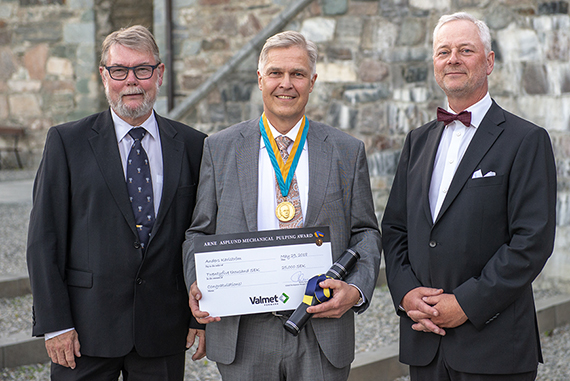