It has been over five years since Nordic Paper Bäckhammar in Sweden, began its journey to increase the capacity of the cooking plant. The initial production target was 700 admt/d with a future target of 800 admt/d – a level that has now been surpassed.

Three upgrades were made to the cooking plant and Valmet was chosen as the exclusive supplier. In addition to having a very good customer relationship, one of the deciding factors was that Valmet had new products ready for the market for two of the upgrades which allowed Bäckhammar to be the first to install the new technology.

In September 2014, the newly developed Valmet Chip Bin OB (OptiBin) was installed – a product designed to not only optimize runnability, but to also eliminate channeling in the bin which reduces the environmental impact from emissions. Installation was completed during the annual maintenance stop (7 days).

The operation of the new chip bin has been very successful: Chip pre-steaming has improved allowing the Kappa number to be increased, which has reduced wood consumption by almost 3% as a result of the higher yield. Additionally, the mill’s emissions of weak gases have been reduced. The previous equipment accounted for about 50% of these emissions, but the Chip Bin OB has eliminated that portion entirely.

Production was increased from 620 to about 660 admt/d, but other limitations were discovered in the cooking plant. The chip feeding line had reached its maximum capacity, resulting in vibrations throughout the system. The continuous digester was also limited, and modifications were needed to further increase production.

“The upgrades have allowed us to increase production and reduce both wood losses and maintenance costs. After two years of operation, the wear and tear we have seen on, for example, the chip pump has been minimal,” says Bengt-Erik Larsson, pulp mill technician at Nordic Paper Bäckhammar.

In 2016, Valmet was commissioned to continue the upgrade of the cooking plant with modifications to the digester. By lowering the digester extraction screens, the retention time in the cooking zone could be increased and allow additional production. Valmet Flexible Screens (OptiFlex) were installed during the annual maintenance stop and the results were outstanding – the production was increased from 660 to 700 admt/d while also increasing the Kappa number from 43 to 48. Bäckhammar now had a digester that could reach the new goals set for the cooking plant.

With the digester no longer limiting production, a decision was made to address the limitations of the chip feeding line. Valmet presented the newly developed Valmet Pump Feed Solution G3, which converts the conventional chip feeding system into a new modern pump solution and eliminates the High-Pressure Feeder. Bäckhammar accepted, and became the world’s first mill to upgrade a conventional feeding line to this system. The new solution has helped to eliminate vibrations in the feed system and is extremely quiet despite the large chip pump.

is a feeding system for chips into continuous cooking systems to replace high-pressure feeders. 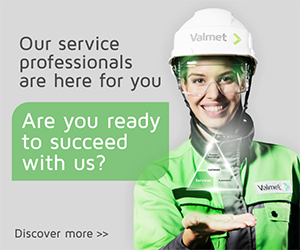