An important part of the process in sewage works is the ability to measure the sludge total solids content order to concentrate and separate the sludge and to avoid pumping unnecessarily large amounts of water around, because this steals capacity and consumes electricity.

When Henriksdal's sewage works had to change to a new sludge total solids content meter, they chose Valmet TS from Endress+Hauser. This is a microwave-based inline meter in the form of a pipe section that is installed in series with the pump and, among other things, results in easier handling as it does not react to color changes or deposits to the same extent as other methods.

Stockholm is one of Europe's fastest growing cities and, to meet the need of the rapidly increasing population, Stockholm's sewerage system needs to be expanded and renovated. From previously only receiving the wastewater from the inner city and the southern suburbs, Henriksdal's sewage works are now being dimensioned for the western suburbs as well. The sewage works in Bromma are being closed and a new sewer tunnel is being built from Bromma to Henriksdal. "We are receiving an ever increasing load and, thus, need to increase the capacity," says Tobias Salmonsson, process engineer at Henriksdal's sewage works for Stockholm Vatten & Avfall AB.

Reliable measurement of the sludge total solids content frees up that capacity and reduces the costs for unnecessary electricity consumption. Using microwave technology and glass-coated sensors, the problems of grease adhering to the sensors, or varying color and particle size, disrupting, optical methods for example, are eliminated

The sludge should maintain a given thickness

The first step in the treatment process is mechanical cleaning, which involves removing all particles in the wastewater greater than a couple of millimeters. The next step is the chemical treatment and pre-sedimentation, where the sludge is separated from the liquid. "The sludge settles at the bottom of the pre-sedimentation basin and we then pump it out of the basin. It is important that the sludge maintains a given thickness since it will then move on to our digestion gas chamber," Tobias Salmonsson says.

The uses for the biogas include fuel for buses, space heating and electricity generation. "To allow us to measure the dry substances in the sludge and ensure we are pumping sludge and not water, we have a sludge level meter that measures the TS level. In our plant, we have 13 pre-sedimentation basins that are equipped with a total of three pump groups and the sludge level meter is placed after each pump," Tobias Salmonsson says and continues: "One of our existing sludge total solids content meters broke down and so needed replacing. The meter was a radioactive type. Because handling radioactive meters is difficult and, moreover, expensive, we wanted to test another method. For this reason we took a look around the market and opted for Endress+Hauser's microwave based meter, Valmet TS." 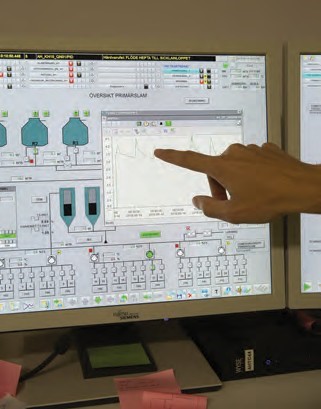 The Valmet TS is based on microwave technology and is intended for the sewage treatment industry. It meters and checks the total solid substances for optimal process performance.

"The Valmet TS can be likened to microwaves X-raying the flow and finding
the TS level in the water running in the pipe. It is the best product for this type of application. Thanks to reliable measurement of the sludge total solids content, we can start controlling and pumping based on the real sludge tonnage and, thus, free up the capacity and reduce the costs for unnecessary electricity consumption or overdosing with polymer," Ulf Johansson, responsible for Valmet's model series at Endress+Hauser, says.

Apart from the Valmet TS, there is also the LS model for levels of suspended substances in complex reject water flows where, for example, air and Struvite cause problems for stable measurement as well as the DS model that measures the TS level of finished dry sludge in real time before it goes to landfill, so it is possible to optimize the dewatering and avoid paying for shipping water to landfill.

Stockholm Vatten & Avfall installed a Valmet TS at one of the pump group's in Henriksdal's sewage works during May. "The biggest advantage with the Valmet TS is the easy handling. In terms of sheer precision, we have not yet had time to evaluate it. But, what we have seen so far is promising. If everything works as we hope, we are planning to replace our sludge level meters at the other two pump groups with this type as well," Tobias Salmonsson concludes. 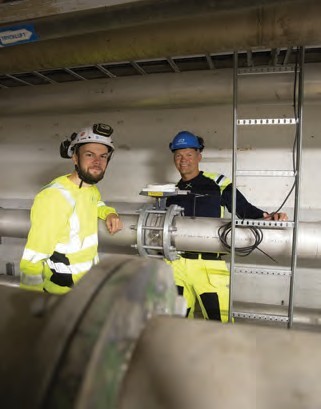