The Otava navigates in challenging and icy conditions

The Otava operates in the Kotka archipelago as a commuter and oil recovery vessel. The vessel can navigate in ice that is 30 cm thick and is an irreplaceable help to the residents of the archipelago. The vessel's navigation in icy conditions is facilitated by a modern automation solution provided by Valmet.

The Otava was built for Finferries by Uki Workboat in its Uusikaupunki shipyards. The vessel was designed to traverse 30 cm-thick ice and is currently operating as a commuter vessel in the Kotka archipelago. In addition to this, the vessel can undertake oil recovery operations as necessary. The vessel began its operations in the archipelago in August 2014. 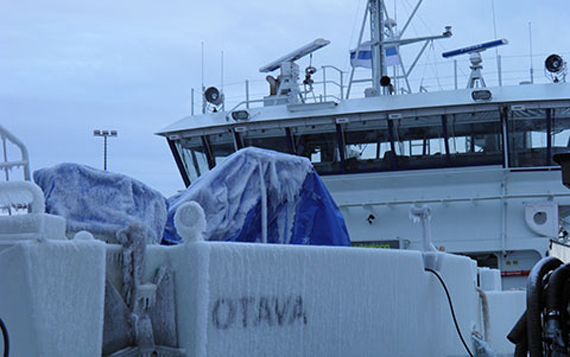 Captain Timo Mäkelä is preparing for a trip from Kotka to Kuutsalo on a freezing January day. The water that splashed on to the deck during the previous stormy passage has formed a thick sheet of ice, which must be removed before the passengers arrive. Mäkelä is standing on the deck and observing the departure preparations. For this particular half-hour voyage, the ship will be carrying a dozen or so passengers and several all-terrain vehicles, which are a common means of transport for people living in the archipelago. 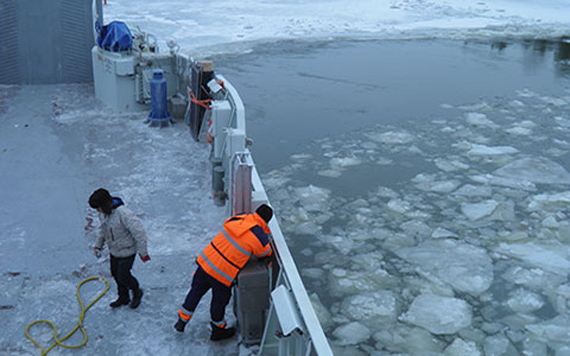 The ship also serves another important role as an oil recovery vessel. According to Mäkelä: "We are in a state of constant oil recovery readiness. So far we have not seen any real action – just drills. Any oil spilled at sea is steered into the vessel's tanks using booms. The vessel is equipped with three tanks, thanks to which we can recover up to 100,000 liters of spilled oil."

In addition to this, Valmet DNA's Replay function makes it possible to review previous trips at a later date. Timo Mäkelä is interested in how much fuel was consumed on the previous trip, when all of the vessel's engines were in use. Using the Replay function, he can go back to the trip in question and even zoom in on a specific time. The function provides a better understanding of the factors that affect fuel consumption, on the basis of which the vessel's operation can be further optimized.

Timo Mäkelä steers the vessel with a steady hand through the ice-covered channel, reaches the open sea and enters another narrow channel leading to Kuutsalo pier. Following the narrow channel requires precision and lots of expertise.

According to Ville Wahlroos, the delivery of the new Valmet machine monitoring system also included a short training course, which taught him the basics of the system. However, there's no substitute for practical experience.

The passengers are disembarking. Afterwards, the vessel takes on new passengers and heads back to the port of Kotka, piloted by professionals.

For local residents, the vessel provides an important connection between the archipelago and the mainland. The vessel can carry up to 100 passengers and eight cars.
The passengers themselves are pleased with the new vessel, describing it as a smooth and pleasant ride. The low engine noise does not hinder conversation, so the vessel is filled with lively discussion.

For more information: Per Syvertsen