Significant benefits for tissue machines with the new roll covers

Tissue machines represent one of the most demanding application points when it comes to press roll covers. They are usually faster than machines producing printing paper and board. Their press rolls usually have a rather small diameter, leading to an extremely high loading frequency of the nips. The operating environment of the cover is challenging due to water, steam and the heat generated by the Yankee cylinder.

Furthermore, a great number of operational requirements are placed on the roll covers. For example, the suction roll nip acting as the 1st press must raise the dry content of the web to 40–45 percent. When it comes to runnability and quality requirements for tissue paper, the covers must be evenly hard and significantly softer than the covers used in machines producing printing paper or board. The pressure level in a nip formed with a soft cover is low, which is beneficial for paper thickness, for example.

The aforementioned factors often lead to short grinding intervals due to wearing or changes in cover hardness, an insufficient dewatering capacity and cooling problems related to the roll in the 2nd nip. In addition, other problems have been caused by sudden debonding of roll covers especially in the press roll in the 2nd nip. 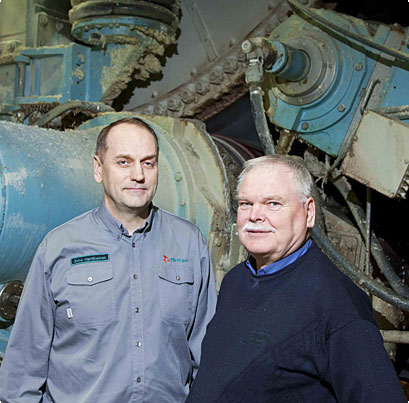 benefits offered by Valmet’s polyurethane covers have been longer grinding intervals and the elimination of roll cooling in the 2nd press positions, Reijo Vessari from the Metsä Tissue Mänttä mill explains. Eero Hartikainen from Valmet on the left.

Over the years, the Metsä Tissue Mänttä mill in Finland has also become familiar with many of the aforementioned cover problems and challenges often encountered on tissue machines. Valmet and Metsä Tissue have a long history of collaboration in roll maintenance and roll cover development projects. Valmet delivered the first Valmet Press Roll Cover PF** to the Mänttä mill at the end of 2010. A cover equipped with suction holes and grooves was installed in a press suction roll position on PM 9 in January 2011, and the cover functioned flawlessly for a full operating period of one year.

The roll cover was noted to be in extremely good condition during service grinding in January 2012. The operating period of earlier covers in the position in question had usually been six to eight months. After a successful start new polyurethane covers were introduced to other roll positions as well. Valmet has subsequently delivered five new-generation polyurethane covers to the tissue machines in Mänttä. One of the covers was installed in a press suction roll and four in the press rolls in the 2nd nips.

“Valmet’s polyurethane covers have worked well and met our expectations. The most significant benefits have been longer grinding intervals and the elimination of roll cooling in the 2nd press positions,” Process Engineer Reijo Vessari from the Metsä Tissue Mänttä mill explains. Furthermore, the softness of the covers has proved to be beneficial with regard to paper thickness.

Thanks to their positive experiences, Metsä Tissue plans to replace all traditional rubber covers with new-generation polyurethane covers as the rolls are recovered.